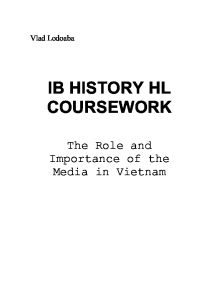 The Role and Importance of the Media in Vietnam

Vlad Lodoaba IB HISTORY HL COURSEWORK The Role and Importance of the Media in Vietnam Word Count: 2825 Contents: 1 -Introduction p3 2-The Media and The Government p3 3-The Media and Public Opinion p8 4-Conclusion p13 5-Appendix (images) p14 (all images are (c) their respective owners) 6-Bibliography p15 1-Introduction I will not try to deal in this essay with the media's coverage of the Vietnam war. That would be impossible, if not because of the sheer volume of information, coming from one news agency only, because of the diversity of information and not seldom the contradictory facts different reporters and news agencies present. There were more than 6501 accredited journalists in Vietnam between 1964 and 1973. I will try to analyze, in as much depth as the scope of the essay allows, the relations between the media and government and military officials, the impact the media had on the American public and lastly 1 will try to establish whether it was indeed the media that lost the war for the United States. My use of primary sources (specially the newspapers of the times or TV footage of the war) however will be limited, because of the difficult access to such sources as well as the limited perspective they offer in relation to the "bigger picture" of the war. 2-The Media and the Government With regards to the media, the Vietnam war has been known as the "living-room war". It was the first TV war2, a war in which the footage from one day's battle would be in millions of Americans' rooms within twelve hours, and it has been maintained that it was indeed this very close media coverage that influenced public opinion, eventually turning it against the war. ...read more.

It simply made it more aware of what was going on in Vietnam, and even at that point, many Americans still wanted an escalation, rather than a de-escalation of the war7. What probably made the relations between the media and the military so difficult was the outrageous optimism of many superior officers. Gen. Harkins, the commander of the MCAV (Military Assistance Command, Vietnam) between 1962-1964, was characterized by an unrealistic optimism and Halberstam writes - the high command of the MCAV became a place "isolated and eventually insulated from reality". It is worthwhile noting that many of the superior officers now were junior officers in World War II, which was eventually catastrophic for two reasons: firstly it was inconceivable for them that America, the world's super-power could lose a war, and secondly they were by no means able to make feasible decisions in a war they had never seen before, such as the guerilla and psychological warfare in Vietnam. The ever-optimistic Harkins was replaced in 1964 by Gen. W. Westmoreland. Although more realistic, it was difficult even for him to asses the situation without any front lines. Westmoreland was also a believer in "the big war" and an attrition warfare that would eventually exhaust "Communist" resources. In his relations to the media, however, he was by no means friendly and he took every chance he got to criticize the press, specially David Halberstam and Maleom Brown especially: Finding fault was one way to achieve the sensational and finding fault with an oriental regime with little background in or respect for Western style democracy was easy ...when their peers back home rewarded them with a shared Pulitzer price, the pattern for those who followed was set. ...read more.

Also what people tend to ignore today is that the photograph of the VC suspect being shot was contextualized so as to aid the US effort, and it was presented as the execution of a member of the VC suspected for several American deaths. When it comes to photographs, it was not the images themselves, but their subsequent incorporation in the anti-war effort that created the illusion that the written press was against the war. Pictures as these, argues Caroline Brothers, have been taken as early as 1962, but were widely rejected by the editors exactly because of their contents, which was not compatible with what the public wanted to see at that time. It appears, therefore, that the images that changed history can only surface when the mood of the public is ripe, hence they exist to reflect and not influence public opinion towards war. 4-Conclusion It is easy to accuse the media for the loss of public support in Vietnam. After thc media's massive blunder of reporting the Tet offensive as a major psychological defeat, and not having "the sophistication, integrity or courage to admit their error"14 (which is actually justifiable by the distrust the media had for official reports) opposition to war rose sharply. Still, the media cannot be singled out as the main cause. Nicholas Hopkinson's statement is the one that probably best reflects the situation of the media in Vietnam: As public enthusiasm faded, reporting became more and more critical[...] but to single the media out as the decisive element in declining public opinion is incorrect. US opinion turned against the war because it was long unsuccessful, costly in terms o/human life and expenditure. ...read more.