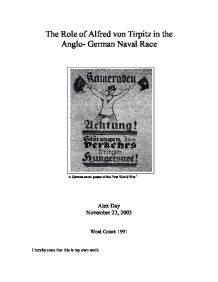 The Role of Alfred von Tirpitz in the Anglo- German Naval Race.

The Role of Alfred von Tirpitz in the Anglo- German Naval Race A German naval poster of the First World War.1 Alex Day November 23, 2003 Word Count: 1991 I hereby state that this is my own work Table of Contents A PLAN OF INVESTIGATION 2 B SUMMARY OF EVIDENCE 2 C EVALUATION OF SOURCES 4 D ANALYSIS 5 E CONCLUSION 8 F LIST OF SOURCES 10 Internal Assessment A Plan of investigation What role did Alfred von Tirpitz play in the Anglo-German naval race of World War I, 1890-1914? For almost a century historians have been arguing over the causes of the First World War. One of the factors regularly discussed is the Anglo-German naval race, which involved the competing construction of the British and German navies between 1897 and 1914. Much of the blame for the consequential building of navies has fallen on the shoulders of the German state secretary of the navy office, Alfred von Tirpitz. The purpose of this internal assessment is to find out what roll Tirpitz played in the Anglo-German naval race. I will research my investigation with some of the many books published about the origins of World War I, including some of Tirpitz's speeches, letters, and propaganda as well as other key figures of the naval race. ...read more.

Terraine, John, ed. The Great War, 1914-1918. New York: The Macmillan Company, 1965. This book, written by John Terraine in 1965, gives an overview of the events leading up to and during World War One. The author argues, in the introduction, that it was the German militarism that made the war inevitable. The book is very valuable because instead of the author writing his opinion on the events, he informs readers using primary sources throughout the entire book to tell the story. This is valuable because it displays the events when they happened. On the other hand it is limited because it does not have the benefit of using historiography, and the documents could be misrepresentative. There are many photographs used that are also valuable because they capture moments in history in vivid detail, simulating a first-hand experience. However, they could be limiting because certain details could be excluded, which would affect the view of the event. D Analysis Importance of investigation in its historical context The Anglo-German naval race was a significant event that ruined any possible relationship between the two nations before the start of World War I. Although many historians, for instance Ferguson or Fay, do not attribute the naval race to causing the Great War, it is a consensus among historians that by Germany building up their navy and destroying any relationship with Britain, they ...read more.