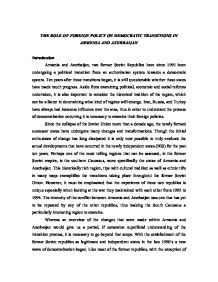 THE ROLE OF FOREIGN POLICY ON DEMOCRATIC TRANSITIONS IN ARMENIA AND AZERBAIJAN Introduction Armenia and Azerbaijan, two former Soviet Republics have since 1991 been undergoing a political transition from an authoritarian system towards a democratic system. Ten years after these transitions began, it is still questionable whether these states have made much progress. Aside from examining political, economic and social reforms undertaken, it is also important to consider the historical tradition of the region, which can be a factor in determining what kind of regime will emerge. Iran, Russia, and Turkey have always had immense influence over the area, thus in order to understand the process of democratization occurring it is necessary to examine their foreign policies. Since the collapse of the Soviet Union more than a decade ago, the newly formed successor states have undergone many changes and transformations. Though the initial enthusiasm of change has long dissipated it is only now possible to truly evaluate the actual developments that have occurred in the newly independent states (NIS) for the past ten years. Perhaps one of the most telling regions that can be assessed, in the former Soviet empire, is the southern Caucasus, more specifically the states of Armenia and Azerbaijan. This historically rich region, ripe with cultural tradition as well as ethnic rifts in many ways exemplifies the transitions taking place throughout the former Soviet Union. However, it must be emphasized that the experience of these two republics is unique especially when looking at the war they maintained with each other from 1992 to 1994. The intensity of the conflict between Armenia and Azerbaijan was one that has yet to be repeated by any of the other republics, thus making the South Caucasus a particularly interesting region to examine. Whereas an overview of the changes that were made within Armenia and Azerbaijan would give us a partial, if somewhat superficial understanding of the transition process, it is necessary to go beyond that scope. ...read more.

Though it is necessary to state that there are some differences in the process, however that does not mean that they cannot be compared. Even though post communist states face different challenges, there is a similarity when evaluating the influence of a foreign state. At this point it is necessary to discuss some of the challenges faced by former Communist states. Though the debate on the comparability of the democratization process of former communist states and other authoritarian states is still ongoing, it would be unwise to believe that there are no differences in the transition process. Nevertheless, differences do not mean that each of the processes cannot be compared, on the contrary, differences along with similarities make the research much more dynamic. Indeed what makes transitions from communism unique from from all other forms of authoritarianism is the fact that it is a transition from Communism. Thus raising the question of how are they different? It is often stated that one of the distinguishing factors of post communist transitions is the rise of ethnic conflict. From 1989 to 1991 three countries broke up causing ethno-territorial conflicts. The main internal impediments faced by post communist societies in their transition can be traced to the social and economic legacy of communism. Aside from the foreign policy of other countries, those states in transition had to deal with eighty years of perverted modernization. Even though under communism Russia became a modernized, highly industrialized, urbanized and literate society, the fact remains that the regime tried to undermine the human ability for autonomous action. This is most obviously reflected in the transition to a liberalized market economy, where the concepts of preoperty and originality are essential. Clearly, there is a strong correlation between the establishment of democracy and the growth of a market economy. However, with the destruction of the notion of private property, the notion of personality was also ruined. ...read more.