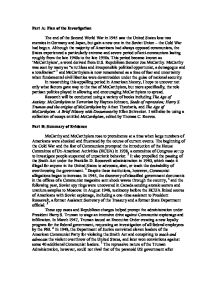 The role of partisan politics in the spread of McCarthyism

Part A: Plan of the Investigation The end of the Second World War in 1945 saw the United States lose two enemies in Germany and Japan, but gain a new one in the Soviet Union - the Cold War had begun. Although the majority of Americans had always opposed communism, the States experienced a particularly extreme and severe period of anti-communism lasting roughly from the late 1940s to the late 1950s. This period became known as 'McCarthyism', a word derived from U.S. Republican Senator Joe McCarthy. McCarthy was seen by many as "a ruthless and irresponsible political opportunist, a demagogue and a totalitarian" 1 and McCarthyism is now remembered as a time of fear and uncertainty when fundamental civil liberties were downtrodden under the guise of national security. In researching this appalling period in American history, I hope to uncover not only what factors gave way to the rise of McCarthyism, but more specifically, the role partisan politics played in allowing and encouraging McCarthyism to spread. Research will be conducted using a variety of books including The Age of Anxiety: McCarthyism to Terrorism by Haynes Johnson, Seeds of repression; Harry S. Truman and the origins of McCarthyism by Athan Theoharis, and The Age of McCarthyism: A Brief History with Documents by Ellen Schrecker. I will also be using a collection of essays entitled McCarthyism, edited by Thomas C. Reeves. Part B: Summary of Evidence McCarthy and McCarthyism rose to prominence at a time when large numbers of Americans were shocked and frustrated by the course of current events. ...read more.

In terms of research conducted for this particular topic, this source was satisfactory on some levels because the main issue dealt with is how a little-known freshman senator from Wisconsin amass enough power to inspire such mass hysteria and even threaten two respected presidents. However, there are several limitations to this source. It did not specifically address partisan politics as a factor, and much of the book is written almost as a biography of McCarthy. While quite entertaining, especially when comparing McCarthyism to the recent antics of the George W. Bush Administration following 9/11, the main limitation of the source is that it is a highly personal account, from which the conclusions drawn are somewhat subjective. While this is understandable due to the fact that the author's father was himself a Pulitzer Prize-winning journalist who stood up to McCarthy in the 1950s, the narrative style does not help to write an objective paper analyzing one of the key elements in the spread of McCarthyism. Part D: Analysis What is known about the factors that encouraged McCarthyism are that they were a combination of partisan politics, support from right-wing groups and the 'complacent paranoia' 17 of the American people, in that, although most of McCarthy's accusations were unsubstantiated, the general public allowed themselves to fall into a state of unnecessary paranoia. It is clear that the spread of McCarthyism was not based on any legitimate fear of Communist influence in America because, ironically, not only did the American Communist Party never have more than 100 000 members at any given time, but its political influence was already on the decline when McCarthy entered the national scene. ...read more.

What I've been able to gather through analyzing the opinions on partisan politics itself is that Rovere's view of McCarthyism as a bipartisan doctrine seems to most encompass what McCarthyism may have been about, because while the other two views have merits, they do not address their discrepancies. The Truman Administration did seem, with their anti-Communist foreign policy, to set the stage for McCarthyism, however Theoharis did not address the fact that Truman was against the McCarran Act, which was the single bill that really allowed McCarthyism to take off. The Republicans did indeed use McCarthy successfully to gain a more powerful position in government, but Latham does not account for the fact that the Republicans were as influenced by a fear of McCarthyism as McCarthy was used as a tool by them. The fact remains that the unwillingness of both the Democrats and Republicans to stand up to McCarthy allowed McCarthyism to take hold in America. However, to assert that political partisanship, even bipartisanship, completely explains the spread of McCarthyism would be false. In the same way that the refusal of the political parties to stand up to McCarthy allowed McCarthyist influence into the government, the willingness of the American people to be led by an obvious demagoue allowed McCarthyist influence to spread across the country. While there were a few in the journalism and artistic communities that publicly denounced McCarthy, it is essentially the general American public with their 'favourable view' of him that really allowed for the rise of McCarthyism. ...read more.