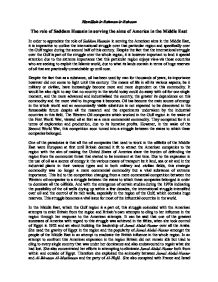 The role of Saddam Hussain in serving the aims of America in the Middle East.

Bismillah-ir-Rahman-ir-Raheem The role of Saddam Hussain in serving the aims of America in the Middle East In order to appreciate the role of Saddam Hussain in serving the American aims in the Middle East, it is imperative to outline the international struggle over that particular region and specifically over the Gulf region during the second half of this century. Despite the fact that the international struggle over the Gulf is part of the struggle over the whole region, it is however important to lend it special attention due to the extreme importance that this particular region enjoys vis-a-vis those countries who are seeking to exploit the Islamic world, due to what its lands contain in terms of huge reserves of oil that are practically unmatchable up until now. Despite the fact that as a substance, oil has been used by man for thousands of years, its importance however did not come to light until this century. The means of life in all its various aspects, be it military or civilian, have increasingly become more and more dependent on this commodity. It would be also right to say that no country in the world today could do away with oil for one single moment, and the more advanced and industrialised the country, the greater its dependence on this commodity and the more vital to its progress it becomes. Oil has become the main source of energy in the whole world and an economically viable substitute is not expected to be discovered in the foreseeable future despite all the research and the experiments undertaken by the industrial countries in this field. The Western Oil companies which worked in the Gulf region in the wake of the First World War, viewed oil at first as a mere commercial commodity. They competed for it in terms of exploration and production, due to its lucrative profits. However, in the wake of the Second World War, this competition soon turned into a struggle between the states to which these companies belonged. ...read more.

As for the British agents in the region, they were forced to side with Iraq, finance her and even supply her with fighters in order to prevent what they deemed as their frontline ditch from crumbling in the face of the Iranian threat. What is remarkable is that during the eight-year war, the conflict was concentrated around Basra. This gives us a clear indication of the aim of this particular war since Basra is near the Kuwaiti border and Kuwait was then the Leading Gulf State. Therefore intimidating Kuwait and forcing her to accept American protection would also lead to other Gulf States seeking American protection. It is true that Kuwait was very alarmed every time Iran achieved some military advantage in the Basra region but this particular fear did not lead her to seek American protection. Her reaction was to merely supply Iraq with funds to buy weapons. As a means of tightening her grip around the Gulf States as a whole and Kuwait in particular, America inspired Saddam to extend the scope of the war to the Gulf waters as well. Therefore Iraqi war planes started to bomb Iranian oil tankers in the Persian Gulf and Iran retaliated by attacking any oil tankers sailing in the Gulf, especially those heading towards Kuwait because she used to supply money and logistic help to Saddam Hussain. At this moment the fears of the Gulf States, including Kuwait, intensified which led her to accept the concept of allowing American flags to be placed on her oil tankers especially over the commercial ships which were sailing to and from her seaports. America deemed this initiative as encouraging but not sufficient. Therefore she planned a host of other initiatives in order to increase the fear of Kuwait in the hope that she would surrender to America completely. These measures undertaken by America were reflected in Saddam Hussain's surrendering of Al-Faw to Iran in a lightening military operation that lasted one single night. ...read more.

a plan in collaboration with al-Bakr, who was still President of the Republic, to stage a coup led by Hardan at Tikriti who had previously been forced to flee iraq by the American agents. Hardam came to Kuwait and he started to prepare himself in order to move to Baghdad. At the 11th hour however, the Americans found out about the reasons of his presence in Kuwait and while Hardan was undergoing medical tests in one of the hospitals in Kuwait, an Iraqi assassination squad intercepted him , killed him and fled to the Iraqi Embassy. The rules of diplomatic immunity meant that that the Kuwaitis could not arrest the assassins. Ironically the killers of Al-Tikriti accompanied his coffin in the same plane that took him to Baghdad without the Kuwaiti authorities being able to touch them at all despite the diplomatic humiliation they had just inflicted upon Kuwait. This is Saddam Hussain,and this is the role that he played in serving his masters the Americans at the expense of this Ummah's children and at the expense of his country, without taking any heed from other collaborators before him and without realising that the role of the collaborators - no matter how long it takes - will come to an end either at the hands of his masters or at the hands of others. The story of Saddam Hussain serves as a lesson to the Ummah and America should realise that despite all her might she would not have succeeded in achieving her aims in the Muslim lands had it not been for the presence of the likes of Saddam as rulers in these countries. The Islamic Ummah should also realise that these rulers, if they stay in power, it is because she is neglecting her duty. It is she who should decide whether she remains under the influence of the Kuffar or whether she wants to liberate herself by eradicating their agents from her lands. 28th Shaaban 1418 AH 28th December 1997 CE ...read more.