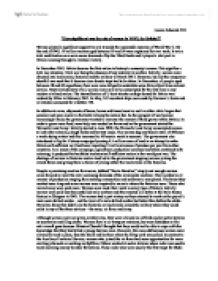 The Role Of Women in WW2

Lauren Edwards 13D "How significant was the role of women in WW2, for Britain?" Women played a significant supportive role towards the successful outcome of World War 2. By the end of 1942, 10 million women aged between 19 and 50 were registered for war work. It was a total mobilisation on a scale never dreamed of by the Third Reich and it played a vital part in Britain winning through to eventual victory. In December 1941, Britain became the first nation in history to conscript women. This signifies a total war situation. Total war being the absence of any restraint in warfare. Initially, women were directed into land armies, factories and the military in March 1941. However, by July the manpower shortfall was such that it became clear drastic steps had to be taken. In December, all people aged between 18 and 60 regardless of sex were now obliged to undertake some form of part time national service. ...read more.

Despite a promising reaction from some, dubbed "Bevin Beauties," simply not enough women came forward to meet the ever increasing demands of the armaments machine. They worked in all manner of production ranging from making ammunition and uniforms to aeroplanes. The hours they worked were long and some women were required to move to where the factories were. Those who moved away were paid more. Woman soon made their mark in every type of factory. Initially women were paid less than unskilled male workers and this resulted in a strike at the Rolls Royce factory in Glasgow in 1943. The women had a part-victory as they returned to work on the pay of a male semi-skilled worker - not the level of a male skilled worker but better than before the strike. However, those that didn't join the factories or land armies joined the military where they could enlist in any of the three services - the navy, air force and army. ...read more.

As well as being part of the army and air force, they could also join intelligence. Women were also used as secret agents. They were members of SOE (Special Operations Executive) and were usually parachuted into occupied France or landed in special Lysander planes. Their work was exceptionally dangerous as just one slip could lead to capture, torture and death. Their work was to find out all that they could to support the Allies for the planned landings in Normandy in June 1944. This was a great contrast to their roles before the war. Before the war, women were very family orientated. They were not supposed to be independent, work in factories or have combat roles. This all changed during the war. After the war, despite their new found independence, most women were happy to return to their roles before the war. In conclusion, I think that women played a major role in the war despite not being exploited to their full potential. ...read more.