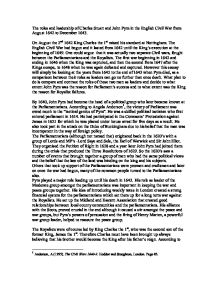 The roles and leadership of Charles Stuart and John Pym in the English Civil War from August 1642 to December 1643. On August the 2nd 1642 King Charles the 1st raised his standard at Nottingham. The English Civil War had begun and it lasted from 1642 until the King's execution at the beginning of 1649. One could argue that it was actually two separate Civil wars, fought between the Parliamentarians and the Royalists. The first war beginning in 1642 and ending in 1646 when the King was captured, and then the second from 1647 after the Kings escape, to 1648 when he was again defeated and captured. However this esssay will simply be looking at the years from 1642 to the end of 1643 when Pym died, as a comparison between their roles as leaders can go no further than ones death. What plan to do is compare and contrast the roles of these two men as leaders and decide to what extent John Pym was the reason for Parliament's success and to what extent was the King the reason for Royalist failures. By 1640, John Pym had become the head of a political group who later became known at the Parliamentarians. According to Angela Anderson1, the victory of Parliament was owed much to the "tactical genius of Pym". He was a skilled political tactician who first entered parliament in 1614. He had participated in the Commons' Protestation against James in 1621 for which he was placed under house arrest for five days as a result. He also took part in the attack on the Duke of Buckingham due to his belief that the man was incompetent in the way of foreign policy. The Parliamentarians (although not named that) originated back in the 1620's with a group of Lords and MP's -Lord Saye and Sele, the Earl of Warwick and Sir John Eliot. ...read more.

This of course was one of Pym's roles as leader of the Moderate group. His success at this, although it didn't unify Parliament (there were still war and peace groups), helped hold Parliament together and lead them in the direction to victory. So parliament had a much tougher start to the war, despite being in London. Although Parliament may have had no less support than the King, the ability to control it and unify it into one strong force was a challenge that they were faced with which the King didn't have. So, as far as sides go, it would appear that the King had a far more organised, larger and unified force against Pym's various committees that were divided into three main groups that all had very different views. As Pym said himself about the Kings and his forces: "the king and his people are obliged to one another in the nearest relations....he is the head, they are the body." Yet using hindsight, we know that Parliament won, despite Charles' initial advantage. So what went wrong for Charles? Did his role or Pym's have any effect in the turn around? Although Charles was the unified leader of a loyal force, he did not keep as tight a control on his commanders as Parliament did on theirs. Angela Anderson10 wrote that in 1643 his commanders began to plunder local counties regardless of whether or not they were loyal or neutral and this severely damaged the local's relations with the royalists. Brian Manning11 explained that "farmers refused to follow their landlords into the royalist camp and offered to pay their rents to parliament instead. The Yeomen and clothiers, and the whole 'middle rank' of people in Somerset, as well as the 'poorer sort', turned to parliament to defend them against the royalist nobility and gentry." Angela Anderson12 believes that this was not so much a fault of the King but simply the need to supply the King's armies with food and other necessities due to the high demands of the army. ...read more.

So it would seem that the King was somewhat to blame for his decision to leave London and nobody but himself can be blamed for his decision to adopt two policies at once, negotiation and war. The King, however many personality problems he had, was not entirely to blame for his military failure in linking up at Oxford as the conflicting aims of his followers were to blame for this. His commanders can also be blamed for plundering the local towns and losing the king his support but in the end it's the kings responsibility, as the leader of a unified force, to maintain tight control over every aspect of his force. This is what Pym did, and this was one of the main differences I found between them. Pym left little room for error where the king did leave room. Pym's tactics were clever and set Parliament up for the future years but what helped Parliament just as much was their strategic geographical position. His ability to convince all of Parliament that the Solemn League and Convenant that he established with the Scots was necessary was a prime example of his political skill and powers of persuasion. He showed cunning in removing Henry Marten to appease the peace party and throughout all this he kept both peace and war groups together. He realised the necessity in having strong relations with the local counties and his financial system, once up and running, was an important factor in supporting the Parliamentarian cause. After reading the countless books I am led to believe he is a great leader and a fine politician and his title bestowed on him by Anderson "Tactical Genius" does him great justice. Despite dieing at the end of 1643, I believe he was the most important man to have opposed Charles and it was his actions in these early years of the war that set Parliament up in the years to come while I believe that it was Charles' mistakes that saved Parliament in the early years. ...read more.