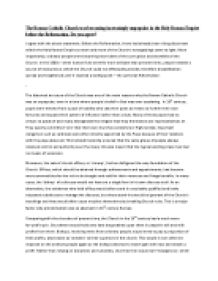 The Roman Catholic Church was becoming increasingly unpopular in the Holy Roman Empire before the Reformation. Do you agree?

﻿The Roman Catholic Church was becoming increasingly unpopular in the Holy Roman Empire before the Reformation. Do you agree? I agree with the above statement. Before the Reformation, there had already been rising discontent within the Holy Roman Empire as more and more of the Church?s wrongdoings came to light. More importantly, ordinary people were becoming more alert of the corruption and shortfalls of the Church. In the 1500s - when human lives were far more delicate than present times, people needed a source of reassurance, which the Church could not effectually provide, therefore dissatisfaction spread and heightened until it reached a boiling point ? the Lutheran Reformation. - The distorted structure of the Church was one of the main reasons why the Roman Catholic Church was so unpopular, even in a time where people?s belief in God was ever escalating. In 16th century, popes were elected from a pool of nobility who saw their posts as means to further their own fortunes and expand their sphere of influence rather than a duty. ...read more.

Rather than relying on donations and subsidies, churches then would sell ?indulgences?, which are reputedly able to lessen one?s suffering in purgatory. - Corruption has always been a proliferating problem in medieval Europe, but it seemed that people?s appetite for such corruption was decreasing before the Reformation. Even though anticlericalism was rapidly worsening in Europe, it did not cause ordinary people to shy away from Catholicism at all ? to the contrary, there was a significant growth in popular piety in the Holy Roman Empire all the way up until the Lutheran Reformation. For both the wealthy and the poor, there was a trend in forming prayer groups which would say prayers and hold masses for members that have passed away. Many were travelling on pilgrimages and relic collection was at its peak yet during the 16th century. At the same time, religious literature was increasingly widespread amongst the population. Financially speaking, the Church was thriving, but otherwise it was not faring well at all. It was facing intensifying criticisms from the general public, who had begun to doubt its existence. ...read more.