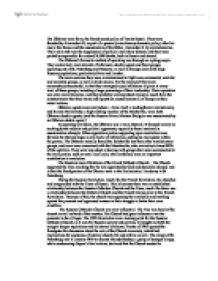 The Okhrana were from, the feared secret police of Tsarist Russia. They were founded by Alexander III, as part of a generally reactionary domestic policy, after his rise to the throne and the assassination of his father, Alexander II, by revolutionaries. Their main task was the suppression of political and labour dissent, and they were probably responsible for around 26,000 deaths, both in Russia and abroad. The Okhrana's favourite method of operating was through co-opting people. They controlled a vast network of informers, double agents and front groups, operating out of St. Petersburg and Moscow, as well as foreign cities with large Russian populations, particularly Paris and London. ...read more.

When opposition parties supporting open revolution were formed, the Okrana began a new tactic of infiltration, putting its own agents within the parties. The Okhrana actually feared the Bolsheviks less than other revolutionary groups, and were more concerned with the Mensheviks, who carried out almost 90% of the agitation. They were less adept at dealing with groups that were unconnected to the main parties, such as small local cells, who combined, were an important contribution to revolution. The Russians were Christians of the Greek Orthodox Church. The Church supported the Tsar, teaching that he was appointed by God and should be obeyed, and in fact the Headquarters of the Okrana were in the Ecclesiastical Academy in St Petersburg. ...read more.

The 1905 Revolution was a turning point for the Russian Orthodox Church, as it was for Russian society and politics; it brought out both the clergy's deeper aspirations and its internal divisions. Events of 1905 opened the floodgates for discussion about the role of the Church in society, which had implications for questions of internal church life and reform as well. The clergy of St. Petersburg met in January 1905 to discuss Bloody Sunday; a group of younger clergy, while condemning Gapon's final actions, declared that the Church needed to recognize the people's suffering and respond to it. The 1905 Revolution brought out tensions that were latent in the reform movement. Prior to the revolution, younger and older clergy in St. Petersburg alike could support the mission to the workers and some degree of social reform without directly addressing the issue of its political implications. ...read more.