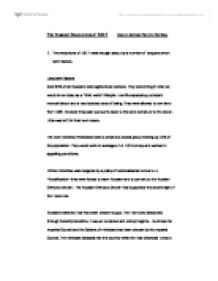 The Russian Revolutions of 1917

The Russian Revolutions of 1917 Kevin James Patrick McKay 1. The revolutions of 1917 were brought about by a number of long and short term factors. Long term factors Over 80% of all Russians were agricultural workers. They were living in what we would know today as a "third world" lifestyle. Low life expectancy, constant manual labour and a very isolated state of being. They were allowed to own land from 1861 however they paid vast sums back to the land owners or to the crown. Little was left for their own needs. The town workers (Proletariat) were a small but crucial group making up 10% of the population. They would work on average a 14-16 hour day and worked in appalling conditions. Ethnic minorities were targeted by a policy of nationalisation known as "Russification" they were forced to learn Russian and to convert to the Russian Orthodox church. The Russian Orthodox Church fully supported the devine right of the Tsars rule. Russians believed Tsar had been chosen by god. The Tsar ruled absolutely through heredity bloodline. It was an outdated and corrupt regime. He chose his Imperial Council and his Cabinet of ministers had been chosen by his Imperial Council. The Ministers basically ran the country while the Tsar (Nicholas II) had a life greatly contrasting to that of his people. He was a weak leader however stongly conservative. The revolutionaries inspired the workers to rise. ...read more.

The provisional government asked for soviet support and armed them with 40,000 guns (extension sheet 1), this meant the soviets now had a mass of weapons at there disposal. The germans aided the Bolsheviks and printed leaflets directed towards front-line troops urging them to desert (Shukman handout). The Provisional Government tried to arrest Lenin on charges of fraternising with the Germans . Lenin escaped to Finland and returned in April aided by the Germans in a sealed train car (Communism On-line : Lenin Biography). Lenin denounced the Provisional Governement and called all socialists in support of the Bolsheviks. Also he urged peasants to take the land from the landlords and industrial workers to seize control of the factories. (April Theses Schoolnet). Also in march the Petrograd Soviet ordered all soldiers to obey the Soviet. The Provisional Government had a great weakness due to the existence of the Ispolkom, this was a large committee of Soviets. This contained elected representatives from the proletariat, the peasants and soldiers. This meant that Russia had "two governments". The soldiers would only follow the governments orders if it did not contradict those of the Ispolkom (extension sheet 1). Bolshevik Success The Bolsheviks gained support automatically for their reluctance to continue the war effort. Lenin was a determined leader who could enforce policies to which most of the population were wanting to hear. "Peace, bread and land!" This in itself was popular, the soldiers badly wanted peace, fighting a war they could not win. ...read more.

(G Wath - Russian Civil War 2000) Also Bolshevik success was due to their highly motivated ideology. All of the Bolsheviks knew exactly what they were fighting for, conversely the Whites were a compromised force of politically contrary beliefs. The famine of 1921 killed around 5 million people in Russia. This was caused by two factors a major drought and the Bolshevik requisitioning programme which controlled how much the peasants could plant and "war communism" removed their surplus crops. The fact the Red Army were successfully supplied with food meant shortages in major cities and rationing. The Kronstadt rising summarized the animosity of the people towards the Bolsheviks. These sailors were previously seen as Bolshevik legends and heros. Trotsky had described them as the "pride and glory of the revolution". These sailors were demanding exactly what the Bolsheviks had asked for only a short time earlier; political freedom, chose and change occupations, elect their own representatives etc. They did not want to abolish the Soviet State however they insisted they did not want a one-party state. Trotsky gave the order and the rising was crushed, the revolting sailors were shot in cold-blood. A New Economic Policy (NEP) was announced and this allowed peasants to sell surplus foods for profit and factories with less than 20 workers would be back under the owners control. This was a swift response and it worked. Food production increased and industrial output soared. The "economic carrot" ensured peasants and factory workers were content and the "political stick" ensuring the destruction of all opposition through censorship and a secret police secured the Revolution. ...read more.