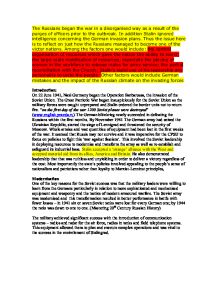 The Russians began the war in a disorganised way as a result of the purges of officers prior to the outbreak.

The Russians began the war in a disorganised way as a result of the purges of officers prior to the outbreak. In addition Stalin ignored intelligence concerning the German invasion plans. Thus the issue here is to reflect on just how the Russians managed to become one of the victor nations. Among the factors one would include: the central organisation of resources which gave the nation the ability to resist; the large-scale mobilisation of resources, especially the placing of women in the workforce to release males for army service; the partial reconciliation with the Church; Stalin's rapid use of his leadership and personality to unite the people. Other factors would include German mistakes and the impact of the Russian climate on the invading forces Introduction: On 22 June 1941, Nazi Germany began the Operation Barbarossa, the invasion of the Soviet Union. The Great Patriotic War began inauspiciously for the Soviet Union as the military forces were caught unprepared and Stalin ordered the border units not to return fire. "on the first day of the war 1200 Soviet planes were destroyed" (www.english.pravda.ru) The German blitzkrieg nearly succeeded in defeating the Russians within the first months. ...read more.

The Gosplan (State Planning Commission) set out strict priorities and production quotas. Workers directly involved in the war effort were placed under military discipline, no one was allowed to leave without permission, holidays were suspended and there were severe punishments for breaches of discipline. As so many men were involved in military service with an extremely high casualty rate, the industrial and economic revival was heavily dependent upon women. In 1943 50% of the workers in the war industry were women and 66% in agriculture. The general living conditions were not pleasant and food was rationed. Nationalism / patriotic spirit The Soviet government had to rely on the support of the people to gain victory. In order to increase popular enthusiasm for the war, Stalin changed his domestic policies to increase patriotic spirit. Nationalistic slogans replaced much of the communist rhetoric in official announcements and the mass media. Active persecution of religion ceased and in 1943 Stalin allowed the Russian Orthodox Church to name a patriarch when the office had been vacant for two decades. In the countryside the communist authorities permitted greater freedom on the collective farms. ...read more.

However, Stalin remained a potent symbol of power to the Russian people, despite the massive losses, the mistakes and the lack of preparation in the early days. Stalin was hesitant and enept early in the war but did eventually listen to his generals and accept their advice - Vasilevsky, Zhukov, Antonov - and thereby turned his vast nation into an irresitable force to win the Patriotic War. Conclusion The policies employed in the Great Patriotic War proved to be successful and resulted in the defeat of the German army. They also meant that Russia emerged as one of the world's great military powers with control over most of Eastern Europe but these national achievements had been bought at great cost. An estimated 25 million Soviet citizens, military and civilian, perished in the war and severe material losses were inflicted throughout the war affected areas of the country. The war was ultimately won by the suffering and efforts of all the ordinary Soviet people. " were organised, bullied or coaxed by their political masters and responded to their task with a mixture of crusading zeal and fatalistic duty" Richard Overy ...read more.