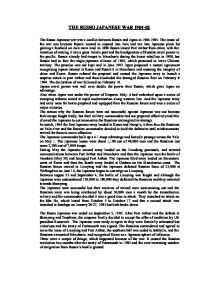 THE RUSSO JAPANESE WAR 1904-05 The Russo Japanese war was a conflict between Russia and Japan in 1904-1905. The cause of the war was because Russia wanted to expand into Asia and ran into Japanese plans for gaining a foothold on Asia main land. In 1898 Russia leased Port Arthur from china, with the intention of making it into a great Asiatic port and the headquarters of Russian naval power in the pacific. Russia already had troops in Manchuria during the boxer rebellion in 1900, but Russia had to face the anglo-japanese alliance of 1902, which promised to leave Chinese territory. The promise was not kept and in June 1903 Japan proposed a mutual agreement recognising japans interest in Korea and Russia's in Manchuria and ensuring the integrity of china and Korea. ...read more.

In march, 1904 the first Japanese army landed in Korea and Namp'o, it then face the Russians on Yalu river and the Russian commander decided to hold the defensive until reinforcements arrived for them to move offensive. The Japanese commander built up a 4-1 troop advantage and forced a passage across the Yalu on May 1. The Japanese losses were about 1,100 out of 40,000 men and the Russians lost some 2,300 out of 7,000 troops. During May the Japanese second army landed on the Liaodong peninsula, and severed communications between Port Arthur and Manchuria and then the Japanese won the battle of Nanshan (May 30) and besieged Port Arthur. The Japanese third army landed on the eastern coast of Korea and then the fourth army landed at Gushan on the Manchurian coast. ...read more.

The Russo Japanese war ended on September 5, 1905. After Port Arthur and the defeats at Shenyang and Tsushima, the emperor finally decided to accept the offer of mediation by US president Roosevelt. The Japanese were ready to agree as they were finacially exhausted but victorious and the treaty of Portsmouth was signed. The Russians surrendered and agreed to leave the lease of Liaoyang and Port Arthur, the southern half was ceded to Sakhalin, and the Russians evacuated Manchuria, and recognised Korea as a Japanese sphere of influence. There were a couple of things, which happened because of the war. It caused the Russian revolution two months after the treaty of Portsmouth in 1905 and the ever-increasing number of emigration from Russia's hostile ground. ...read more.