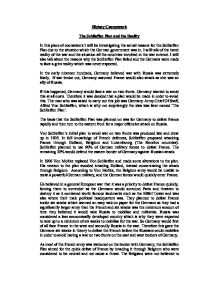 The Schlieffen Plan and the Reality

History Coursework The Schlieffen Plan and the Reality In this piece of coursework I will be investigating the actual reasons for the Schlieffen Plan due to the situation which the German government was in. I will talk of the harsh reality of the war and the situation all the countries involved in the war entered. I will also talk about the reasons why the Schlieffen Plan failed and the Germans were made to face a grim reality which was never expected. In the early nineteen hundreds, Germany believed war with Russia was extremely likely. If war broke out, Germany assumed France would also attack as she was an ally of Russia. If this happened, Germany would face a war on two fronts. Germany wanted to avoid this at all costs. Therefore it was decided that a plan would be made in order to avoid this. The man who was asked to carry out this job was Germany Army Chief Of Staff, Alfred Von Schlieffen, which is why not surprisingly the idea was later named 'The Schlieffen Plan'. The basis that the Schlieffen Plan was planned on was for Germany to defeat France rapidly and then turn to the eastern front for a major offensive attack on Russia. ...read more.

The invasion relied upon rapid movement as it was also a fight against time as they planned to defeat France before the Russians could mobilise. The Germans were not expecting any resistance from Belgium, but the Belgian army fought bravely and managed to delay the German advance. They snipered members of the German army on their way marching through the country and also held up the army very well in the true head to head battle with the Germans. The streets were infested by swarming immigrants in the countries main streets and roads heading for safety and the railways were occupied by the Belgian army. These swarming immigrants stood in the way causing obstacles and made it an even harder task for the German army to progress through the country. This significantly helped slowed down the German army and wasted a lot of time for them as they were on a tight time schedule and meant a lot of hassle as the Germans tried to clear the roads and also make sure of safe railways to pace them into France. The Belgians also later prevented the Germans from taking the French channel ports by flooding their land. The Germans were expected to march 23 kilometres in three days but reality made it almost impossible with the obstacles and lowered soldiers morale and supplies. ...read more.

In the winter rains and weather both sides dug themselves into the ground and held their ground. This is where the 400 miles of trenches were formed from the channel coast through France and Belgium to the Swiss border. This was the development of the Western Front. In conclusion I believe the Schlieffen plan played major part in the development of the western front in 1914. The battle of the Marne and the BEF also played a large part in the development of the western front as without the Battle of Marne the Schlieffen plan may have succeeded, however without the help of the BEF in Belgium and the Battle of the Marne the French wouldn't have had as much time to prepare. They also wouldn't have been as strong and therefore all three were linked together. One other event which links into this is Russia mobilising quicker than expected. With Russia mobilising within 10 days Germany were forced to send soldiers across to the East which weakened the army. This would have also linked into the development of the Western Front as if the Germans were weakened and didn't have as many soldiers they would have to slightly back down and slow down and change strategies, which would reward France with time to change their tactics or do any means necessary to help their cause in the war. ...read more.