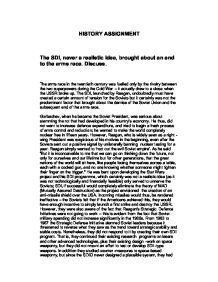 The SDI, never a realistic idea, brought about an end to the arms race. Discuss.

HISTORY ASSIGNMENT The SDI, never a realistic idea, brought about an end to the arms race. Discuss. The arms race in the twentieth century was fuelled only by the rivalry between the two superpowers during the Cold War - it actually drew to a close when the USSR broke up. The SDI, launched by Reagan, undoubtedly must have created a certain amount of tension for the Soviets but it certainly was not the predominant factor that brought about the demise of the Soviet Union and the subsequent end of the arms race. Gorbachev, when he became the Soviet President, was serious about stemming the rot that had developed in his country's economy. He thus, did not want to increase defence expenditure, and tried to begin a fresh process of arms control and reduction; he wanted to make the world completely nuclear free in fifteen years. However, Reagan, who is widely seen as a right-wing President was suspicious of his motives in the beginning, even after the Soviets sent out a positive signal by unilaterally banning nuclear testing for a year. ...read more.

From 1983 to 1987 the Strategic Defense Initiative alarmed Soviet leaders because it threatened to reverse what they saw as the trend toward strategic stability and stable costs. Nonetheless, they did not respond to it by creating their own SDI program. That is, they continued their existing research programs on lasers and other advanced technologies, plus their existing design-work on space weaponry, but they did not mount an effort to test or develop SDI-type weapons. In addition they studied counter-measures to space-based weaponry, but since the SDIO never designed a plausible system, they had nothing specific to study, and their military spending was not affected. Between 1985 and 1987 Gorbachev spent a great deal of effort trying to convince the Reagan administration to restrain the program, presumably because he thought his own military-industrial complex would eventually force him to adopt a program of some sort to counter SDI, but by the end of 1987 the Soviet leadership no longer regarded SDI as a threat. This completely disproves the theory that SDI, Reagan's military buildup and the ideological crusade against Communism had delivered the knockout punch to the Soviet system that had been on the ropes since the early 1980s. ...read more.

did. When the START I treaty was signed in 1991, the U.S. had deployed 12,646 strategic warheads, the Soviet Union 11,212 - the numbers were so large as to be almost meaningless in terms of deterrence. During the 1980s, the Soviet economy continued to deteriorate as it had during the 1970s. The economic decline resulted from the failures of the system created by Lenin and Stalin and not from any effort on the part of the Reagan administration. Without Gorbachev, however, the Soviet Union might have survived for many more years, for the system, thought on the decline, was nowhere near collapse. It was Gorbachev's efforts to reverse the decline and to modernize his country that knocked the props out from under the system. The revolution was in essence a series of decisions made by one man, and it came as a surprise precisely because it did not follow from a systemic breakdown. The Arms Race of the Cold War almost came to a virtual stop after the breakup, as the Russian Federation had severe economic problems in the early 1990s, and could not afford to keep producing nuclear weapons. ...read more.