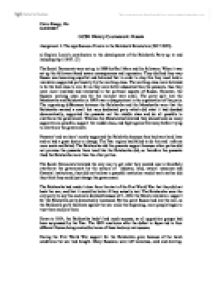 GCSE History Coursework: Russia Assignment 1: The significance of Lenin in the Bolshevik Revolution (1917-1923). a) Explain Lenin's contribution to the development of the Bolshevik Party up to and including April 1917. [7] The Social Democrats were set up in 1898 by Karl Marx and his followers. When it was set up the followers faced severe consequences and repression. They disliked they way Russia was becoming capatilst and believed that in order to stop this they must hold a revolution supported particularly by the working class. The working class were believed to be the best class to aim for as they were better eduacated than the peasants, thus they were more involved and interested in the politacal aspects of Russia. However, the Russian working class was for the moment very small. The party split into the Mensheviks and Bolsheviks in 1903 over a disagreement in the organisation of the party. The organising differences between the Bolsheviks and the Mensheviks were that the Bolsheviks wanted a small but very dedicated party which did what it had decided democratically, supported the peasants not the middle class and do all possible to overthrow the government. Whereas the Mensheviks believed they should have as many supporters as possible, support the middle class, and fight against Germany before trying to overthrow the government. Peasants' and workers' mostly supported the Bolshviks because they had very hard lives and so had a great desire to change. The Tsar regime had failed to do this and reforms were weak and failed. The Bolsheviks ahd the peasants support because other parties did not promise the peasants there land like the Bolsheviks did, so therefore the peasants liked the Bolsheviks more than the other parties. The Social Democrats believed the only way to get what they wanted was to forcefully overthrow the government by the seizure of industry, land, natural resources and financial institutions, they did not believe a peaceful revolution would work neither did they think they could just change the government. ...read more.

However, the provisional government wanted to keep the allies, and not break away before the war had ended; this showed peasants that the Provisional government were not considering the state of the country, or the conditions of the peasants, and that they did not care. John Reed, an American journalist described the situation in Petrograd in 'Ten days that shook the world': "Week by week,food became scarcer.The daily allowance of bread fell... Towards the end there was a whole week without bread at all. Sugar one was entitled to at the rate of two pounds per month - if one could get it at all, which was seldom... There was milk for half the babies in the city; most hotels and private houses never saw it for months. For milk and tobacco one had to stand in a queue long hours in the chill rain" Peasants wanted land, food, and peace, exactly what the Bolsheviks had been promising to bring them. This put the Bolsheviks in a good position to get a lot more support. The Russian army had suffered from shortages, many were dying, and many Russians had lost family to the war already. Many units were ready to back the Bolsheviks, and the Military Revolutionary Comittee would help to co - ordinate troops and organise a revolution. Even the units that disapproved would not act against the soviets. Alexander Kerensky became Prime Minister of the provisional government, and was at once faced with a challenge, as the commander - in - chief of the armies, General Kornilov planned to get rid of the Petrograd Soviet, and take control of the provisional government. Kornilov's rebel troops were some of the best in Russia, and as Kerensky had few loyal troops to defend him, it seemed that Kornilov's revolt would easily succeed. However, Kerensky decided to allow the Bolsheviks to set up a defence force, called to Red Gaurds, to help defend his position, the provisional government, and the Petrograd Soviet. ...read more.

I think that this statement has a lot of truth in it, and that whilst Lenin was a good leader for the Bolsheviks before they took control, his ideas about how to run the government, and deal with workers and peasants were inapropriate, and other methods would have been more successful, and of help to the Bolsheviks. Lenin's leadership qualities were of not great help here, and War Communism was no success at all. Fanya Kaplan who shot Lenin at the end of August in 1918, made a statement to the Cheka, describing Lenin as a "traitor to the revolution" I have come to the conclusion, after analysing the four reasons given why Lenin and the Bolsheviks were able to hold on to power during the civil war, that they are not all equally as important. Overall I think that Trotsky's organisation of the Red army, and the dissunity of the White opposition are more important reasons than War Communism and the Leadership qualities of Lenin. Trotsky's organisation of the Red Army is a very important reason as to why Lenin and the Bolsheviks were able to hold onto power, as he built the Red Army up, almost from scratch, he introduced conscription, and I think that he was a great asset to the Communists, and the Red Army. The disunity of the White opposition is another important reason as to why Lenin and the Bosheviks were able to hold onto power; I think that if they had been more organised, with better leaders, and less disunity, a victory for the White Army would have been possible. War Communism was a failure, peasants resisted, the economy was close to collapsing, and food shortages only worsened. Whilst Lenin may have been a good leader in the past I do not think that his leadership qualities were a help to the Red Army, as he spent most of his time organising War Communism, which led to peasant uprisings, and was no success. Claire Knapp, 10e 04/05/2007 ...read more.