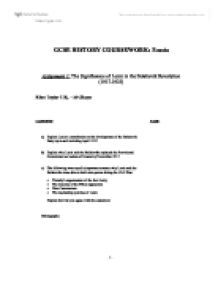 The Significance of Lenin in the Bolshevik Revolution (1917-1923)

GCSE HISTORY COURSEWORK: Russia Assignment 1: The Significance of Lenin in the Bolshevik Revolution (1917-1923) Ellen Taylor 11E, - Mr Sharpe CONTENTS PAGE: a) Explain Lenin's contribution to the development of the Bolshevik Party up to and including April 1917. b) Explain why Lenin and the Bolsheviks replaced the Provisional Government as leaders of Russia by November 1917. c) The following were equally important reasons why Lenin and the Bolsheviks were able to hold onto power during the Civil War: * Trotsky's organisation of the Red Army * The disunity of the White opposition * War Communism * The leadership qualities of Lenin Explain how far you agree with this statement. Bibliography a) Explain Lenin's contribution to the development of the Bolshevik Party up to and including April 1917. Every successful political party needs a compelling leader, an inspiration, and an originator of ideas. Lenin was a vital source of all these qualities and more for the Russian Bolshevik Party. It was in 1903 that he made his first mark as a leader. At the second Congress of the Social Democratic Party he presented his plan for a revolution and insisted that the Congress agreed to every new and innovative element of it. Lenin was determined to get his own way. He proposed a new form of party, a professional revolutionary organization that would seize power for the working classes and he bullied his ideas into the congress. He was able to out - argue his colleagues because he was sure of his ideas. He caused such a commotion for the Social Democrats that the result of the congress was a split in the Party; the Bolsheviks followed Lenin's proposals and the Mensheviks became a larger more diverse group who rejected his ideas. From the start the Bolsheviks had the minority of supporters, however, it was Lenin's intention to keep the party small at first consisting of only the most dedicated and loyal members. Lenin was undoubtedly the initiator of the Bolshevik Party. ...read more.

Newspapers and posters were distributed among the Red Army giving impressions of the Reds invincibility and the harsh consequences of a White victory. However the Whites used this same tactic. The use of 'Red Terror' was also a contributing factor to the Bolshevik victory. The Cheka had been given the power to arrest or execute rivals without trial. Discipline and fear was brought to all those who helped or fought for the White opposition. A prime example is of the murder of the Tsar and his family in 1918, as they were seen as a symbol for the White cause. The majority of the country were peasants and they had a good reason to back the communists. Land had been recently and eventually given to them, and they were none too keen to lose it again so quickly. If the whites had won the Civil War then landowners would instantly demand their land back. There is no doubt that all the factors were important to the success of the Bolsheviks. They each gave the Bolsheviks a unique advantage over the opposition, but without any one of the four mentioned it is fair to say that the Bolsheviks may not have won the Civil War, this means that no factor one was more important than another. However, there is a definite link between the factors showing that one was caused as a result of the other. Without the strong leadership of Lenin, Trotsky would not have been appointed and the policies of War Communism would not have been implemented, and so the Red Army would not have gained the appropriate supplies to become such an effective fighting force against the Whites. If the White Army had been better qualified then the Bolsheviks would have been faced with a greater threat and the war could have gone either way. Therefore I can agree with the statement that each of the reasons were equally important to Lenin's preservation of power through the Civil War. ...read more.