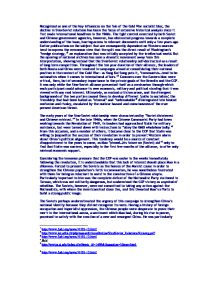 Recognised as one of the key influences on the fate of the Cold War socialist bloc, the decline in Sino-Soviet relations has been the focus of extensive historical analysis since it first made international headlines in the 1960s. The tight control exercised by both Soviet and Chinese government agencies, however, has obstructed progress towards a complete understanding of the issue, barring access to relevant documents until only a few years ago. Earlier publications on the subject that are consequently dependent on Western sources tend to express the erroneous view that the split was the direct result of Washington's "wedge strategy,"1 an explanation that was initially accepted by the intellectual world. But the opening of national archives has seen a dramatic movement away from this interpretation, showing instead that the Sino-Soviet relationship self-destructed as a result of long term competition. Throughout the ten year duration of their alliance, the leaders of both Russia and China were involved in campaigns aimed at consolidating their national position in the context of the Cold War - as Yang Kui Song puts it, "communists...tend to be nationalists when it comes to international affairs."2 Concerns over the Eastern bloc were critical, then, but of secondary importance to the private goals of the Kremlin and the CCP. It was only while the Sino-Soviet alliance presented itself as a mechanism through which each participant could advance its own economic, military and political standing that it was viewed with any real interest. Ultimately, as mutual criticism arose, and the divergent backgrounds of the two parties caused them to develop different 'paths to socialism', the friendship that had been hailed as "eternal" and "unbreakable"3 disintegrated into heated confusion and rivalry, escalated by the nuclear hazard and consciousness of the ever present American threat. ...read more.

That this was a genuine Soviet concern, possibly prompted by the US signing of a Treaty of mutual defense with Taiwan in 1954, was demonstrated in Khrushchev's expressed willingness to share nuclear weapons technology with Mao. The root of these efforts to equalize relations with China- Khrushchev's desire to rectify what he perceived to be mistakes on Stalin's part- would eventually open up a massive split in the Sino-Soviet relationship. It is interesting to note, however, that Khrushchev's denouncement of Stalin at the 20th National Congress of the Soviet Union was initially received as a welcome instance of the "self-criticism"11 that Mao had always held to be central to the development of Marxism. The CCP also appeared to approve of Khrushchev's rapprochement approach; in early 1956, party member Nie Rongjen had "praised East-West d�tente, and urged rapprochement between the two German states."12 Indeed, before the adverse effects of this method became apparent with the uprisings in Poland and Hungary, the Chinese had indicated that they were quite happy to follow the Soviet lead in these matters, informing the Yugoslavians that "as long as the Soviet Union did not criticize Stalin, we would be in no position to do so...as long as (they) did not restore diplomatic relations with Yugoslavia, we could not establish relations with you."13 Substantial changes, however, in the domestic, local, and international arenas, brought about a dramatic shift in Mao's views on the Soviet revisionism, and consequently in his approach to the Sino-Soviet relationship. The rebellions in Poland and Hungary, for instance, showed the CCP that promotion of self-criticism and d�tente was generating a dangerous polycentrism within the communist bloc. ...read more.