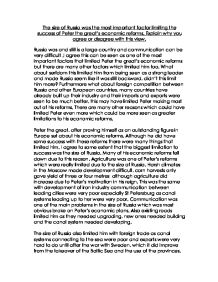 The size of Russia was the most important factor limiting the success of Peter the great(TM)s economic reforms. Explain why you agree or disagree with this view.

The size of Russia was the most important factor limiting the success of Peter the great's economic reforms. Explain why you agree or disagree with this view. Russia was and still is a large country and communication can be very difficult .I agree this can be seen as one of the most important factors that limited Peter the great's economic reforms but there are many other factors which limited him too. What about serfdom this limited him from being seen as a strong leader and made Russia seem like it was still backward, didn't this limit him more? Furthermore what about foreign competition between Russia and other European countries, many countries have already built up their industry and their imports and exports were seen to be much better, this may have limited Peter making most out of his reforms. There are many other reasons which could have limited Peter even more which could be more seen as greater limitations to his economic reforms. ...read more.

Communication between Peter and small towns was very hard meaning policies he had put in place were very hard to keep an eye on as transportation was very poor too. All these factors limited Peter as these all contributed to how the size of Russia really did limit him to successfully achieving what he wanted out of these economic reforms. Even though I do agree to some extent the size of Russia did limit him the most, there were other factors which may have been more important to the limitations he faced. Serfdom was one of these. Serfdom was a law code which bound the peasant holding land from a lord, permanently to the state at which he worked. This law limited Peter as it showed Russia was still in political backwardness. The rest of Europe had moved on from serfdom while Russia was still in the grips of it.. ...read more.

Although entrepreneurs could have helped Peter to increase Russian trade they could have limited him too. Entrepreneurs showed the inequality between them and the peasants. Even though there was all this enthusiasm for entrepreneurship it did remain limited but did show the instability of the social structure in Russia and how everyone is not really equal or have the same kind of rights. This includes the serf community who were bound to the government. Overall I agree with the view that the size of Russia was the most important factor limiting the success of Peter the great's economic reforms. Many reasons contributing the size of Russia limited Peter including the poor rivers and canal systems connecting to St Petersburg and Moscow. Although there were many other reasons including serfdom were important to influencing the success of the economic reforms, I believe the size of Russia limited Peter more as communication was hard between leading capitals and some economic changes could not really stretch across the whole of Russia as it was such a large country to sustain. ...read more.