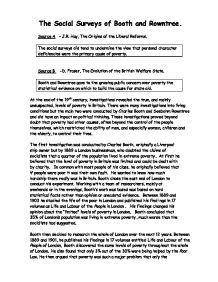 The Social Surveys of Booth and Rowntree. At the end of the 19th century, investigations revealed the true, and mainly unsuspected, levels of poverty in Britain.

The Social Surveys of Booth and Rowntree. Source A - J.R. Hay, The Origins of the Liberal Reforms. The social surveys did tend to undermine the view that personal character deficiencies were the primary cause of poverty. Source B - D. Fraser, The Evolution of the British Welfare State. Booth and Rowntree gave to the growing public concern over poverty the statistical evidence on which to build the cause for state aid. At the end of the 19th century, investigations revealed the true, and mainly unsuspected, levels of poverty in Britain. There were many investigations into living conditions but the main two were conducted by Charles Booth and Seebohm Rowntree and did have an impact on political thinking. These investigations proved beyond doubt that poverty had other causes, often beyond the control of the people themselves, which restricted the ability of men, and especially women, children and the elderly, to control their lives. The first investigation was conducted by Charles Booth, originally a Liverpool ship owner but by 1889 a London businessman, who doubted the claims of socialists that a quarter of the population lived in extreme poverty. At first he believed that the level of poverty in Britain was limited and could be dealt with by charity. In common with most people of his class, he originally believed that if people were poor it was their own fault. ...read more.

In his research, Rowntree was very careful in his definition of poverty. He drew up a poverty line which was the least amount of money a family could live on. He found some 20,000 people living below this line. All the Victorian remedies such as thrift (careful management of money) were no use to these people. You could not be expected to save money when you did not have enough for the basic essentials. He also defined poverty as primary or secondary. In primary poverty a family lacked the basic resources to buy even the basic necessities. In secondary poverty, the family had enough to stay above the poverty line but "wasted" resources in treats and escapism, such as drink of gambling. However, this need to escape could frequently be blamed on poverty itself. Rowntree also argued that poverty was not a constant. People fell into poverty at different stages of their lives, especially in old age. Rowntree also put a figure on the minimum amount of money that a family needed to live. After two years of research, in 1901, Rowntree published his findings Poverty, a study of Town Life, which showed similar levels of poverty (30%) in York as in London. He also found that in York wages were so low that even men in full time employment were forced to live close to starvation level. ...read more.

What political party implemented change and moved away from Laissez - Faire? It was the Liberal party who surprisingly became the pioneers of social reform. In the 1906 election the Liberal Party won a landslide victory producing a House of Commons with a Government majority of 356. Historically their period in office, from the euphoric election victory in 1906, until the outbreak of War in 1914 has been characterised by their revolutionary social reforms and attempts to alleviate poverty for the masses. However, the Liberals did not come to power on the issue of social reform or poverty but on a variety of other issues such as 'Chinese slavery.' Tasks (Morr, Morr & Mon pp50 - 51) (Kerr pp 57 - 58) 1. What did Booth mean by the poor? (Morr Morr & Mon p 50) 2. Was the Poor law coping? (Morr Morr & Mon p 51) 3. What were the minimum necessities Rowntree felt people needed? (Morr Morr & Mon p 51) 4. Why did Booth start his research? 5. Why did he do his research at the weekend and in the evening? 6. How was his research different from previous ideas about poverty? 7. What did Rowntree's research add to Booth's work? 8. What similarities were there in the two reports? 9. How did they differ? 10. Would the politicians be happy about these reports? 11. Copy the text at the top of the page and the diagram below it. 12. For each of the main reasons for poverty write why you think they led to poverty. ?? ?? ?? ?? ...read more.