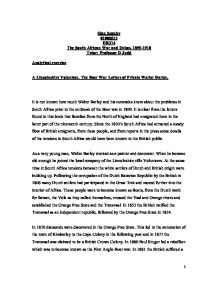 Sian heaphy 01008812 HR314 The South African War and Union, 1895-1910 Tutor: Professor D Judd Analytical exercise A Lincolnshire Volunteer. The Boer War Letters of Private Walter Barley. It is not known how much Walter Barley and his comrades knew about the problems in South Africa prior to the outbreak of the Boer war in 1899. It is clear from the letters found in this book that families from the North of England had emigrated there in the latter part of the nineteenth century. Since the 1820's South Africa had attracted a steady flow of British emigrants, from these people, and from reports in the press some details of the tensions in South Africa would have been known to the British public. As a very young man, Walter Barley worked as a painter and decorator. When he became old enough he joined the local company of the Lincolnshire rifle Volunteers. At the same time in South Africa tensions between the white settlers of Dutch and British origin were building up. Following the occupation of the Dutch Batavian Republic by the British in 1806 many Dutch settlers had participated in the Great Trek and moved further into the interior of Africa. ...read more.

These letters however, provide valuable insight into how the incredible events of those years appeared to the ordinary people of Britain. The letters of the Boer War represent a milestone in the history of communication. The letters from men at the bottom of the military hierarchy were the first wartime letters to be written by a newly literate lower class, following the education reforms of 1870 and 1880. A second factor that makes these letters so valuable is that the Boer war was the last major war where there was little or no censorship. Walter Barley was able to tell his family exactly where he was and what he was doing in the name of empire. The letters of Walter Barley were written to his mother and his sisters. Their letters, written to him have not been found so it is only possible to identify what they wrote from the answers that he sent to them. It is evident that Walter's letters concentrates more on family and home news then on events of the war, other then those in which he was closely involved. It is interesting to consider whether Walter may have discussed more military matters if he had been writing to male members of his family rather then his mother and the 'giddy girls' as he called his sisters. ...read more.

Walter complained about the water that the men were obliged to take from rivers and pools. He wrote that the men drank any sort of water, 'dead horses and mules in it or else go without'. The quality of the water they were forced to drink probably accounted for the outbreaks of diarrhea and dysentery that Walter describes as well as more serious outbreaks of enteric fever. Walter was in hospital twice, once for two weeks with an unspecified fever. Several times he mentions trouble with his legs, either blistering after long marches or from 'twisting my knee a bit'. He does not unfortunately describe the conditions of the hospital. Walter's letters home from South Africa present a clear and moving account of the conditions under which those at the bottom of the military hierarchy served. They tell of the devastating effects of disease, of long marches on pitifully low rations and of inadequate supplies of boots, clothing and bedding. They also describe the comradeship which sustained the volunteers and of Walter's appreciation of the African wildlife and scenery. Swaisland C, A Lincolnshire Volunteer. The Boer War Letters of Private Walter Barley. (2000) Literatim. 1 ...read more.