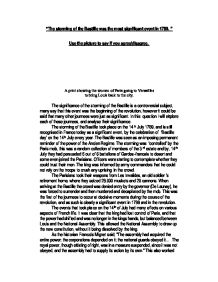 "The storming of the Bastille was the most significant event in 1789." Use the picture to say if you agree/disagree. A print showing the women of Paris going to Versailles to bring Louis back to the city. The significance of the storming of the Bastille is a controversial subject, many say that this event was the beginning of the revolution, however it could be said that many other journees were just as significant. In this question I will explore each of these journees, and analyse their significance. The storming of the Bastille took place on the 14th July 1789, and is still recognised in France today as a significant event, by the celebration of 'Bastille day' on the 14th July every year. The Bastille was seen as an imposing permanent reminder of the power of the Ancien Regime. The storming was 'controlled' by the Paris mob, this was a random collection of members of the 3rd estate and by, 14th July they had persuaded 5 out of 6 battalions of Gardes-francais to desert and some even joined the Parisians. Officers were starting to contemplate whether they could trust their men. The king was informed by army commanders that he could not rely on the troops to crush any uprising in the crowd. ...read more.

anything until the nobles and clergy joined them, this led to weeks of inaction and the governments failure to create any form of leadership. On the 10th June, the 3rd estate passed a motion that it would begin verifying the deputies' credentials even if the two other parties refused to join them. A small minority of priests then joined the 3rd estate in the following days. On the 17th June after a debate the deputies of the 3rd estate voted by 490 to 90 to call themselves the national assembly. It was claiming that as the 3rd estate represented the majority of the population that gave it the right to manage its affairs and decide on taxation. On 19th June the clergy voted to join the 3rd estate, showing that things were escalating on such a sale out of control of the government. Both of these were hugely significant events Another pronounced event occurring before the storming of the Bastille, was The Tennis Court Oath. The aim of this was to directly challenge the authority of the king, who was at last made to act. On the 23rd June the king decided to hold a s�ance royale (a session of the estates general in the presence of the king), attended by all three estates. ...read more.

The painting (by an unknown painter) shows a crowd of women carrying weapons and with a cannon. The print is to mark an event on the 5th October 1789, when a crowd of women stormed the hotel de Ville, the headquarters of the commune, demanding bread. They were persuaded to march to Versailles to see the king. 6000/7000 took up the challenge and set off on the 5-hour march. When reaching Versailles the women invaded the assembly and sent a deputation to the king who promise Paris grain. On this day Louis also agreed to the August Decrees, which meant he was subordinate to the laws, his subjects were made into ordinary citizens. The assembly issued a decree changing Louis' title from; "King of France and Navarre," to "Louis, by the grace of God and the constitutional law of state, king of the French." "The storming of the Bastille was the most significant event in 1789." In conclusion, I agree with the statement. However I believe that all the events that occurred after the Bastille were equally as significant; if it wasn't for the first event then none of the others would have followed. However today people recognise the Bastille as being the most significant as French people still celebrate the 14th July. ...read more.