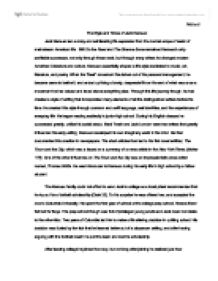 The Style and Times of Jack Kerouac

The Style and Times of Jack Kerouac Jack Kerouac led a crazy and exhilarating life separated from the normal scope of realm of mainstream American life. Still On the Road and The Dharma Bums remained Kerouac's only profitable successes, not only through these work, but through many others he changed modern American Literature and culture. Kerouac essentially shaped a life-style dedicated to music, art, literature, and poetry. When the "Beat" movement flourished out of his personal management, he became came to loathe it, and ended up living a lonely, desperate life on the end of what was once a movement he had valued and loved above everything else. Through this life journey though, he had created a style of writing that incorporated many elements of all the distinguished writers before his time. He created this style through common and swift language, real identities, and the experiences of everyday life. He began reading excitedly in junior high school. During his English classes he succeeded greatly, unlike his social status. Mark Twain and Jack London were two writers that greatly influenced his early writing. Kerouac developed his own imaginary world in his mind. ...read more.

Burroughs. Three of which were authors themselves. He had to balance his friendships and his family because his family greatly disapproved of his friends. During this period Kerouac and Cassidy were making cross-country trips, exploring the American country. These adventures were what inspired his writing of On the Road. Jack and Neal were only on the road for three weeks, but it took him over seven years to write and publish the book (Maher 111). It was during these road trips that Kerouac discovered several literary differences that would change the way the American Novel was written. The most important insight he had on developing his style was in establishing sketching style of writing. This style was based on the fast tempo music of Bebop, and Jack interpreted it into his novels by writing on the spot. Kerouac later described this sketching style of writing as "the greatest moment of discovering his soul" (Clark 102). He would incorporate this style by either writing on the spot or from memory. This took form in his novels in the development of diverse levels of reality and dreams, extraordinary and common feats, and poetry and narrative writing. This was the only way Kerouac knew how to write. ...read more.

The instant fame he received caused him to go into hiding from physically fearing the public. Six months after he started to feel threatened by his notoriety he moved to New Point, New York to live with and take care of his mother. He continued to live and care for his mother for ten more years before dying from an internal hemorrhage. Jack Kerouac had a very unique style when he wrote in prose, which had a completely different flare to it. When writing prose he composed his work in a completely spontaneous way, not thinking and rethinking what he was going to put down, but just feeling it and letting it flow from him. This ability to tell a story was what made him great, and this is also why Jack Kerouac was and still is one of the renowned American writers of his time. How To Meditate -lights out- fall, hands a-clasped, into instantaneous ecstasy like a shot of heroin or morphine, the gland inside of my brain discharging the good glad fluid (Holy Fluid) as i hap-down and hold all my body parts down to a deadstop trance-Healing all my sicknesses-erasing all-not even the shred of a 'I-hope-you' or a Loony Balloon left in it, but the mind blank, serene, thoughtless. ...read more.