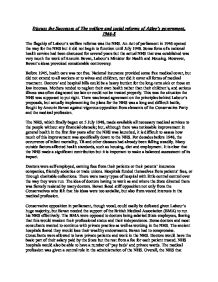 The Successes of Labour from 1945

Discuss the Successes of The welfare and social reforms of Attlee's government, 1946-8 The flagship of Labour's welfare reforms was the NHS. An Act of parliament in 1946 opened the way for the NHS but it did not begin to function until July 1948. Some form of a national health service had been discussed for several years but the actual NHS that was established was very much the work of Aneurin Bevan, Labour's Minister for Health and Housing. However, Bevan's ideas provoked considerable controversy. Before 1945, health care was not free. National insurance provided some free medical cover, but did not extend to all workers or to wives and children, nor did it cover all forms of medical treatment. Doctors' and hospital bills could be a heavy burden for the long-term sick or those on low incomes. Mothers tended to neglect their own health rather than their children's, and serious illness was often diagnosed too late or could not be treated properly. This was the situation the NHS was supposed to put right. There was broad agreement on the principles behind Labour's proposals, but actually implementing the plans for the NHS was a long and difficult battle, fought by Aneurin Bevan against vigorous opposition from elements of the Conservative Party and the medical profession. The NHS, which finally began on 5 July 1948, made available all necessary medical services to the people without any financial obstacle; but, although there was noticeable improvement in general health in the first ...read more.

Post-war financial and economic problems prevented Labour from building as many houses as it had hoped. Indeed, it was not until 1948 that it began to build more than 200,000 a year. Moreover, private house-building for the middle classes was held back, adding further to their complaints about rationing and high taxation. On the positive side, family allowances gave women direct payments and were of particular benefit to working-class mothers, even though the size of the payments, five shillings a week, could only buy a limited amount of what was needed. Many historians argue that the real success of the post-war years was not the provisions of welfare for people in need but the maintenance of full employment. In education, most Labour councils adopted the 'tripartite' model for secondary education which meant different schools for different types of children who were selected at the age of 11 - grammar schools for the academically able, technical high schools for vocational education, and secondary modern schools for the rest. Although this did allow many thousands of bright working-class children to go to the grammar schools, it left many children with a sense of failure at the age of 11. Technical schools were neglected in many areas and modern secondary schools never gained the same prestige or resources as grammar schools. Many Labour left-wingers were disappointed that there was no move to abolish private, free-paying schools. ...read more.

At home, its reforms provided the base for the ever-growing affluence of the 1950s and 1960s. Most of its legacy remained intact until the 1980s. It was a landmark administration and its policies did much to set Britain on the course it was to follow for most of the second half of the 20th century. Some historians looking back are now critical of Labour's domestic achievements. Right-wing historians such as Corelli Barnett have argued that Labour put too many resources into welfare reform at the cost of modernising the British economy. The result was that once competitors like Germany and Japan recovered from the war they were able to outpace Britain in economic growth. Left-wing critics such as Trevor Blackwell have argued that Labour did not deliver socialism but rather propped up capitalism. Some critics have argued that many of Labour's welfare reforms benefited the middle classes more than the working classes. He argued that it was the lower middle class especially who took most advantage of a free grammar school education and free health care. Certainly the Attlee governments did not bring about a major shift in the distribution of wealth or income. Social class divisions still remained. Poverty was not abolished. The planned economy never materialised. Yet, Labour had delivered many of the changes hoped for in the 1930s and 1940s and with all its failings Attlee's government probably did more good for more people than governments usually achieve. ...read more.