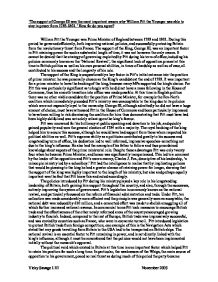 'The support of George III was the most important reason why William Pitt the Younger was able to stay in power from 1783-1801' - How far do you agree?

'The support of George III was the most important reason why William Pitt the Younger was able to stay in power from 1783-1801.' How far do you agree? William Pitt the Younger was Prime Minister of England between 1783 and 1801. During this period he governed efficiently, both improving national policies, and successfully protecting Britain from the revolutionary threat from France. The support of the King, George III, was an important factor in Pitt retaining power for such a substantial length of time, it was not however the only reason. It cannot be denied that the strategy of governing exploited by Pitt during his term of office, including his policies commonly known as the 'National Revival', the significant lack of opposition present at this time in British politics as well as his own personal abilities, in times of hardship as well as of ease, all contributed to his success and the longevity of his rule. The support of the King is unquestionably a key factor in Pitt's initial entrance into the position of prime minister: he was personally chosen as the King's candidate at the end of 1783. ...read more.

In commercial terms Pitt took measures to encourage British trade and the effectiveness of the other newly reformed areas of the country encouraged growing industry to flourish. Indeed, compared to the rest of Europe, British trade was impressively successful, and was envied by countries such as France, who were in economic turmoil. Pitt introduced legislation to protect British trade from foreign competition; one example of this is the Navigation Acts which stated that any goods travelling from Britain to the USA had to be transported on British ships. The national revival is an essential factor to Pitt remaining in power, and is not directly linked with the king's influence, although it must be remembered that the policies would not have been implemented initially without the monarch's approval. The political void which existed in Britain at this time is one important factor which helped Pitt to retain his position for such a long time. In particular, the weaknesses of the Whigs, the main source of opposition to his government, posed no real threat as during much of this period the party became divided and split into different factions. ...read more.

This is important as it shows that once the two came across a matter upon which they could not agree Pitt could no longer keep the position of prime minister: the support of the king was paramount to his rule. Although William Pitt was a highly competent ruler of Britain for eighteen years, a length of time which has been rarely exceeded in British history, the support of the king was the pivotal factor in the length of this ministry, although it cannot be denied that he was an efficient and adept leader. However, the policies introduced, despite being largely successful, had the backing of George III, and it is noticeable that the most testing and dangerous time for Pitt was during the king's absence, demonstrating how significant his support was. The fact that Pitt resigned over a disagreement with the king shows that his backing was of extreme significance, and was ultimately the most important reason for his retention of power, but also showed that Pitt, someone who valued his job above all else, was prepared to sacrifice this most important aspect of his life in the name of integrity and reputation. The final words attributed to Pitt confirm the absolute devotion and responsibility he felt towards his country above all else: 'oh my country, how I love my country!' Vicky Savage LVI November 2003 ...read more.