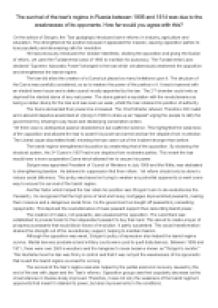 The survival of the tsars regime in Russia between 1906 and 1914 was due to the weaknesses of its opponents. How far would you agree with this?

﻿The survival of the tsar?s regime in Russia between 1906 and 1914 was due to the weaknesses of its opponents. How far would you agree with this? On the advice of Stolypin, the Tsar grudgingly introduced some reforms in industry, agriculture and education. This strengthened his position because it appeased the masses, causing opposition parties to lose popularity and decreasing calls for revolution. He had previously introduced the October Manifesto, dividing the opposition and giving the illusion of reform, yet used the Fundamental Laws of 1906 to maintain his autocracy. The Fundamental Laws declared ?Supreme Autocratic Power? belonged to the tsar which simultaneously weakened the opposition and strengthened the tsarist regime. The tsar did allow the creation of a Duma but placed so many limitations upon it. The structure of the Duma was carefully considered, so as to weaken the power of the parties in it. It was bi-cameral with an elected lower house and a state council mostly appointed by the tsar. The 2nd chamber could veto so deprived the elected duma of any real power. ...read more.

This deprived the revolutionaries of mass peasant support thus cementing tsarist power. The creation of Kulaks, rich peasants, also weakened the opposition. The Land Bank was established to provide funds for the independent peasant to buy their land. This aimed to create a layer of prosperous peasants that would block forces of revolution. It partly succeeded. This social transformation drained the strength out of the revolutionary support, helping to maintain tsarism. Although the opposition was weak, Stolypin?s policy of repression also helped the tsarist regime survive. Martial law was proclaimed and military courts were used to quell disturbances. Between 1906 and 1911, there were over 2500 executions and the hangman?s noose became known as ?Stolypin?s necktie.? This illustrates how the tsar was firmly in control and that it was not just the weaknesses of his opponents that meant the tsarist regime survived for so long. The survival of the tsar?s regime was also helped by the partial economic recovery caused by the end of the war with Japan and the Tsar?s reforms. ...read more.

Yet neither was appreciated by the tsar despite the fact that, without them, tsarism would have been more likely to fail. The weakness of the opposition wasn?t the only factor that enabled the tsar to secure power. Initially, the outbreak of WW1 in 1914 actually benefitted the tsarist regime. Firstly, the Duma showed its support for the tsar by calling for its own suspension during the war, illustrating how the Duma was like putty in the tsar?s hands. Another reason being, that the Bolsheviks were vilified as traitors for being anti-war so many, Lenin included, were forced to leave the country. Thus weakening their influence within Russia and allowing the tsarist regime to survive. The key to the tsar?s survival was his clever use of tactics. In the heat of the crisis he granted political and economic concessions in order to appease opponents. Then once he had regained control he began to suppress the opposition once more. This is primarily seen by the publication of the Fundamental Laws of 1906 and the use of the Okhrana. Lulling the opposing parties into a false sense of security weakened them. This helped the tsarist regime survive. ...read more.