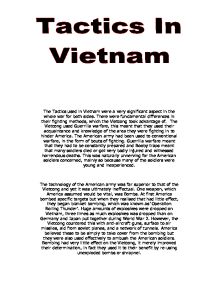 The Tactics used in Vietnam

The Tactics used in Vietnam were a very significant aspect in the whole war for both sides. There were fundamental differences in their fighting methods, which the Vietcong took advantage of. The Vietcong used Guerrilla warfare, this meant that they used their acquaintance and knowledge of the area they were fighting in to hinder America. The American army had been used to conventional warfare, in the form of bouts of fighting. Guerrilla warfare meant that they had to be constantly prepared and Booby traps meant that many soldiers died or got very badly injured and witnessed horrendous deaths. This was naturally unnerving for the American soldiers concerned, mainly so because many of the soldiers were young and inexperienced. The technology of the American army was far superior to that of the Vietcong and yet it was ultimately ineffectual. One weapon, which America assumed would be vital, was Bombs. At first America bombed specific targets but when they realised that had little effect, they began blanket bombing, which was known as 'Operation Rolling Thunder'. Huge amounts of explosives were dropped on Vietnam, three times as much explosives was dropped than on Germany and Japan put together during World War 2. ...read more.

The unbelievable dedication of the Vietcong soldiers was a major factor in the success of the communists. They increased their popularity by using infiltration techniques; this was very successful, as infiltrators were very hard to detect The Vietcong had a seemingly endless supply of soldiers, who would willingly die out of devotion to communism. Most Americans did not feel so strongly about the collapse of communism, and found the hell that soldiers had to go through quite unacceptable. The point is that the Vietcong were prepared for. The American population was lied to about the military strength of the Vietcong. Obviously propaganda was a vital part of getting people to join up. Lies were necessary, but they were not psychologically sound lies. The shock of finding that the Vietcong were an incredibly organised, strong and spirited fighting force crushed the morale of the American soldiers. General Westmoreland (the top U.S commander in Vietnam) believed that America could win a war of attrition. This was naturally unpopular with the troops and even more so with the American press. Although the Vietcong body count was almost as high as that of America, it had little effect on them. ...read more.

Bombs and missiles were countered by anti-aircraft guns, aid from soviet planes, surface to air missiles and a network of underground tunnels which was also effectively used for ambushing the American soldiers. The Vietnamese also used booby traps such as the 'Bouncing Betty' and Punji traps. These booby traps not only killed the Americans but also scared the other Americans nearby because they had seen such horrific deaths of their fellow soldiers and friends which sometimes even resulted in mental problems. Americas' main tactic, Search and Destroy, was also ineffective. It involved finding Vietnamese soldiers and killing them but as they were always well hidden in the underground tunnels. When they weren't in the tunnels it was also hard to tell the difference between them and civilians. Even Americas way of winning support was through money. In South Vietnam they built schools and hospitals to win the hearts of the South Vietnamese which kept them in full support. The Vietnamese soldiers, however, used statistics like how many American's had been killed to keep their spirits up. The Vietnamese were so dedicated to communism that they would even die whereas Americas' soldiers were forcefully made to enter the war and some didn't even believe in the cause. Because of this, the morale of the American soldiers was very low but the Vietnamese soldiers' morale was high. This helped them to kill more American soldiers. ...read more.