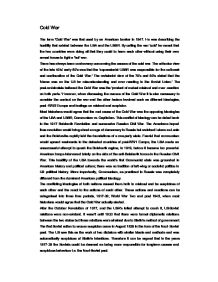 The term 'Cold War' was first used by an American banker in 1947.

Cold War The term 'Cold War' was first used by an American banker in 1947. He was describing the hostility that existed between the USA and the USSR. By calling the war 'cold' he meant that the two countries were doing all that they could to harm each other without using their own armed forces to fight a 'hot' war. There has always been controversy concerning the causes of the cold war. The orthodox view of the late 40's/ early 50's was that the 'expansionist USSR was responsible for the outbreak and continuation of the Cold War.' The revisionist view of the 70's and 80's stated that the 'blame was on the US for misunderstanding and over reacting to the Soviet Union.' The post-revisionists believed the Cold War was the 'product of mutual mistrust and over -reaction on both parts.' However, when discussing the causes of the Cold War it is also necessary to consider the context on the war and the other factors involved such as different ideologies, post -WW2 Europe and feelings on mistrust and suspicion. Most historians would agree that the root cause of the Cold War was the opposing ideologies of the USA and USSR; Communism vs. ...read more.

the Nazi-Soviet pact. World War Two saw the Communist USSR and the Capitalist USA as allies against Hitler, however, this was more an alliance of convenience and there were still tensions between the two. The two sides disagreed about the opening of a second front against Germany. Stalin wanted the USA and Britain to open a western front to alleviate the pressure on the Soviet Army in the East but repeated delay in Anglo-American plans to invade German occupied France angered Stalin and caused mistrust. This led Stalin to fear that the Nazi's would secure a peace deal with the British and Americans and turn all their forces on to Russia. Furthermore, Stalin's suspicions of the US were increased when Roosevelt chose not to inform the Soviets, a supposed ally, about US progress in the development of an atom bomb. Stalin knew he had been denied this knowledge because a team of Russian spies had infiltrated the group of American scientists creating the bomb. Therefore it can be concluded that during the Second World War, the United States played a bigger role than the Soviets in the creation of further suspicion with actions such as the delayed opening of the second front. ...read more.

By 1946, the US-Soviet divide was clear and Churchill summed it up by calling it the 'Iron Curtain'. Behind this curtain the Soviets were building a Communist empire which was hostile to the West. The American Clifford-Elsey Report summarised the USA's thoughts on the Soviets and blamed ideology and not the need for security as the driving force behind Soviet foreign policy. They believed that the Russians were motivated by the 'Marxian theory of ultimate destruction of Capitalist states by Communist states.' To the Soviets, the picture was quite different. The Western Allies were promoting the revival of the Soviets war enemy and saw West Germany as hostile to the Soviet Union. By analysing the events from 1917 onwards it can be argued that the Cold War was not started by one country-the USA or USSR- but by the accumulation of mistrust and suspicion between both. The Americans misinterpreted Stalin's protectionist actions for expansionist ones and the Soviets felt that US foreign policy was aggressive and undermined Soviet security which therefore provoked the USSR into taking further protective measures which the USA saw as aggressive and expansionist. This resulted in a vicious circle of action and reaction which was ultimately due to the deep mistrust and suspicion caused by the conflicting ideologies of Communism and Capitalism. ...read more.