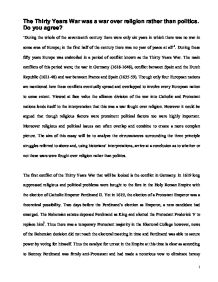 The Thirty Years War was a war over religion rather than politics. Do you agree?

The Thirty Years War was a war over religion rather than politics. Do you agree? 'During the whole of the seventeenth century there were only six years in which there was no war in some area of Europe; in the first half of the century there was no year of peace at all'1. During these fifty years Europe was embroiled in a period of conflict known as the Thirty Years War. The main conflicts of this period were; the war in Germany (1618-1648), conflict between Spain and the Dutch Republic (1621-48) and war between France and Spain (1635-59). Though only four European nations are mentioned here these conflicts eventually spread and overlapped to involve every European nation to some extent. Viewed at face value the alliance division of the war into Catholic and Protestant nations lends itself to the interpretation that this was a war fought over religion. However it could be argued that though religious factors were prominent political factors too were highly important. Moreover religious and political issues can often overlap and combine to create a more complex picture. The aim of this essay will be to analyze the circumstances surrounding the three principle struggles referred to above and, using historians' interpretations, arrive at a conclusion as to whether or not these wars were fought over religion rather than politics. ...read more.

The progressive escalation of potential disasters appeared to be a dominant factor in the decision to attack a neighbor for the sake of defense. This occurred in Sweden for example where Gustavus Adolphus persuaded his government that Ferdinand II's success over the Protestant rebels and their allies presented a major threat to Swedish security. However, after winning important victories this justification for war was further modified as political ambitions took hold of Adolphus. In a sense 'defense had been transformed into a new imperialism'11. Though Adolphus' death put a damper on his more radical plans Sweden continued to fight for economic and political control of the great Baltic river estuaries. Furthermore, Koenigsberger argued that although the Protestant-Catholic antagonism remained the basic determinant, it was not the over-riding one12. As fighting progressed armies were recruited almost indifferently from Catholics and Protestants. Their generals often had private ambitions and fell foul of their employers, so much so that regiments and even whole armies would change sides13. What this shows is that as the conflict in Germany continued religious persecution was no longer the main cause of bloodshed. Instead, as time progressed, political factors such as territorial expansion, national security and personal aggrandizement became increasingly apparent. ...read more.

From the evidence presented in this essay it is apparent that the conflicts of the period were fought over a multitude of issues which varied depending on the particular nation in question. Yet due to the nature of the conflict between Catholics and Protestants religious factors were ever present in the motivations of Europe's leaders. It can be said that the period certainly began as a primarily religious conflict as a Catholic monarch attempted to halt Protestant rebels. The argument that this element of the conflict was fought over religion is cemented by the fact that at the post-war settlement the German princes were confirmed in the right to determine the religion of their subjects26. Though as the conflict in Europe widened it can be said that war was pursued for more economic and political reasons including personal aggrandizement and imperial expansion. Yet into these political factors were woven strands of religious fervor and conflict and vice versa. This ultimately highlights the complexity of the situation because as secular governments did not begin to develop until after 1648 religion and politics were always influencing each other. Due to this it is possible to conclude that the nature of the Thirty Years War cannot be attributed to solely Religion or Politics rather a symbiotic combination of the two. ...read more.