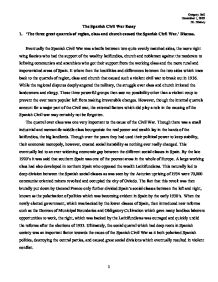 The Spanish Civil War Essay 1. 'The three great quarrels of region, class and church caused the Spanish Civil War.' Discuss. Eventually the Spanish Civil War was a battle between two quite evenly matched sides, the more right wing fascists who had the support of the wealthy latifundios, church and noblemen against the moderate to leftwing communists and anarchists who got their support from the working class and the more rural and impoverished areas of Spain. It where then the hostilities and differences between the two sides which trace back to the quarrels of region, class and church that caused such a violent civil war to break out in 1936. While the regional disputes deeply angered the military, the struggle over class and church irritated the landowners and clergy. These three powerful groups then saw no possibility other than a violent coup to prevent the ever more popular left from making irreversible changes. However, though the internal quarrels account for a major part of the Civil war, the external factors which did play a role in the causing of the Spanish Civil war may certainly not be forgotten. The quarrel over class was one very important to the cause of the Civil War. ...read more.

As a theme of discontent, regionalism had been a constant problem dating back four centuries prior to the Spanish Civil War. Both in the northern Basque region and in Catalonia, language and local traditions had set them apart from the rest of Spain and the central government was regarded with a special distrust. Naturally, Basque and Catalonian nationalism and their demands for autonomy led to violent conflict as the military, which saw it as their duty to keep Spain united, resisted these demands. This is why in 1919-23 alone, more then 700 political assassinations were committed in Catalonia alone. There for it was understandable the military and Nationalists were highly irritated when Catalonia was granted autonomy in August of 1931. Just as with the Second Republic's social reforms, the regional conflict only deteriorate after the reforms with an attempted coup by Jos� Sanjurjo in 1932, specifically in protest against the grant of Catalonian autonomy. Eventually, the regional quarrels comprised much of the violence and Hostility that led to the coup of 1936 and the outburst of the Spanish Civil War. The quarrel over the role of the Church in Spain, was an additional problem that further led to division, violence and general discontent among the population. ...read more.

This is why in the short term it was due to the help of Hitler and Mussolini, who helped Franco's Army of Africa cross over into Spain, and allow the coup was to take occur in the first place. If the Army of Africa had not been involved the coup might have totally failed and not have led to the breakout of a civil war. Though the three major quarrels between class, region and church were the major reasons for the Spanish Civil War of 1936 one must certainly not forget the role the outside influences played in the buildup towards war. Nevertheless, the three quarrels created such intense hostility and division between the Nationalist and Republican side that by 1936 a civil war seemed like the only solution to the ever growing problem. The polarization of politics by 1936 had destroyed nearly all of the center parties can be traced directly back to the three quarrels over class, region and church. While the quarrels over class and region greatly angered the Latitifundistas and military the attack on the church outraged the clergy and church supporters. It was then finally when all three joined forces to overthrow the Republic, the Spanish Civil War was born. Gregory Bell December 1, 2003 HL History 1 ...read more.