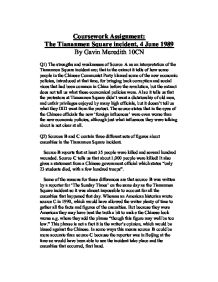 Coursework Assignment: The Tiananmen Square incident, 4 June 1989 By Gavin Meredith 10CN Q1) The strengths and weaknesses of Source A as an interpretation of the Tiananmen Square incident are; that in the extract it tells of how some people in the Chinese Communist Party blamed some of the new economic policies, introduced at that time, for bringing back corruption and social vices that had been common in China before the revolution, but the extract does not tell us what these economical policies were. Also it tells us that the protestors at Tiananmen Square didn't want a dictatorship of old men, and unfair privileges enjoyed by many high officials, but it doesn't tell us what they DID want from the protest. The source states that in the eyes of the Chinese officials the new 'foreign influences' were even worse than the new economic policies, although just what influences they were talking about is not clear at all. Q2) Sources B and C contain three different sets of figures about casualties in the Tiananmen Square incident. Source B reports that at least 35 people were killed and several hundred wounded. ...read more.

(It showed that at least 4 tanks were sent in to disperse the students and their supporters) But it was filmed a day after the incident which means the tanks could have been called in after the protesters had been dispersed. Source E is helpful in studying the Tiananmen Square incident because it gives us an idea of what the protestors wanted to achieve, but it is only a cartoon made up for a British newspaper and has no real basis in reality. Q4) The statistics in source F support the views given in source G about China's economic situation to an extent. Source G tells of how the middle class people were becoming richer and in source F Urban households had more Sewing machines, Watches, Bicycles, Radios and televisions (referred to as goods from now) in 1984 than in 1981. Also they had more goods than rural households did in both 1981 and 1984. But the anomaly is that from 1981-84, rural households had a higher rate of increase of goods per 100 houses. The problem is that the items listed aren't really the things you might use to judge if people were middle class or not. ...read more.

Source E shows the truth (the tank) overpowering the leader of the Chinese government, Deng Xiaoping (the small man). Sources F and G do not really give any idea at all whether the movement was crushed by the Tiananmen Square incident because source F just has a list of statistics and source G is merely an extract from someone's diary in 1991. Although overall source G does not give us any direct information concerning the Tiananmen Square incident, at the end of the extract, the American student, Joe said that he believed there would be another protest that would succeed. But the next sentence written by Bernard Hoyle is "I wonder if the students realise how powerful the Chinese Communist government really is." Looking through all the sources I believe that there is not enough evidence provided to agree with the statement "The Tiananmen Square incident failed to destroy the Chinese democracy movement." From the evidence of these sources, my opinion is that the Tiananmen Square incident in fact succeeded in destroying the Chinese democracy movement. My opinion is backed up by the fact that since 4 June 1989 there has been no other attempt at such a large-scale protest to this very day. ...read more.