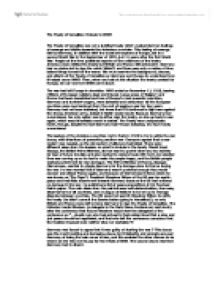 The Treaty of Versailles: Prelude to WWII

The Treaty of Versailles: Prelude to WWII The Treaty of Versailles was not a justified treaty which created German feelings of revenge and dislike towards the victorious countries. This feeling of revenge felt by Germany, in addition with the social atmosphere of Europe, led to a second World War in the September of 1939, just 11 years after the first World War. People at the time published reports on the unfairness of the treaty. America never ratified the treaty but Britain and France still enforced it. Germany had no choice but to sign the unfair 'diktat'1 and there was only a matter of time before things turned for the worse. We must examine the background, clauses, and effects of the Treaty of Versailles on Germany and Europe to understand how it helped cause WWII. Then, when you look at the situation the treaty created for Europe, we can see how WWII came about. The war had left Europe in shambles. WWI ended on November 11, 1918, leaving millions of European soldiers dead and injured. Large areas of Belgium and France had been devastated and two of Europe's most powerful countries, Germany and Austria-Hungary, were defeated and exhausted. All the European countries were now bankrupt from the cost of waging a war for four years. Germany had not been defeated, but knew that if it continued to fight war against the strong American army, defeat in Berlin would result. ...read more.

a book, before the increase in reparations to $32.5 billion by 1963, warning that the treaties would prevent the European economy recovering from the war damage. Germany had hardly enough money to pay the original amount, and, inevitably, great inflation occurred, destroying the economy and causing unemployment and starvation. Furthermore, another clause of the treaty was that the territory of Germany had to be greatly reduced. Britain and France had been malicious and were shortsighted by demanding Germany's money while taking away the territory that could provide the money. In this clause Germany lost 13% of its territory, containing 7.3 million people, and all of her overseas colonies, ending her empire10 . Germany had lost her main coal producing territories of Upper Silesia and the Saarland. In 1913, 139 million tons of coal were used in Germany for railroads, utilities, fuel, and agriculture; the Saarland and Upper Silesia had accounted for 60.8 million tons11 of this. With more than half of Germany's coal taken away, they didn't have enough coal to power the populated industrial country. With industry destroyed there was no way they could pay the reparations. Germany had made proposals dealing with the territorial decisions and reparations; they were willing to give up Alsace-Lorraine (these provinces were reclaimed by France), the province of Posen and North Schleswig and to pay the full reparations if they could only retain their economically good merchant fleet and their colonies. ...read more.

Chamberlain tried to get Poland to join in the British-French-Russian alliance but Poland feared Russia and wouldn't agree to let Russia in its borders. Chamberlain became convinced that Hitler would invade Poland unless Britain defended them. Chamberlain immediately agreed to stand by Poland if she was invaded, but Hitler planned to invade Poland anyway at the end of August 1939. Only 11 years after the First World War had ended came the start of the Second World War, which was a result of an unfair Treaty of Versailles. The Treaty of Versailles had created feelings of revenge from Germany towards the victorious powers, as they had inflicted pain, suffering and insult on them. "The conference ultimately proved little more than a punitive device to extract a pound of cash from the defeated, and produced not a lasting peace, but the seeds for a future war."14 The state Germany was left in after the treaty made it easy for Hitler to come into power as all its people hated the treaty, and were in search of change from that of the failing, democratic Weimar Government. In conclusion, had the guilt not have been blamed solely on Germany, the harshness of the clauses would not have been so great. This would have lessened the reparations, perhaps to a fair amount, elliminating the feeling of revenge on Germany's behalf. The unfairness of the treaty created a situation in Germany with ideal conditions for rising fascist leadership. The Treaty of Versailles set the scene for the chain of events which led to WWII. ...read more.