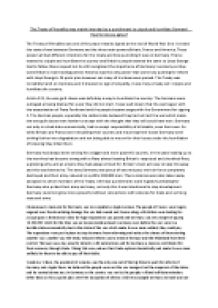 The Treaty of Versailles was mainly intended as a punishment to cripple and humiliate Germany How far do you agree?

﻿?The Treaty of Versailles was mainly intended as a punishment to cripple and humiliate Germany? How far do you agree? The Treaty of Versailles was one of the peace treaties signed at the end of World War One. It ended the state of war between Germany and the three main powers Britain, France and America. These powers all had different intentions for the treaty and how punishing it was on Germany. France wanted to cripple and humiliate the country and Britain?s people wanted the same so Lloyd George had to follow these request but he still recognised the importance of Germany?s economy as they were Britain?s main trading partner America was the only power that were truly pushing for reform with Lloyd George?s 14 point plan however not many of his ideas were passed. The Treaty was incredibly harsh on Germany and it showed no sign of empathy, it was truly a treaty set t cripple and humiliate the country. Article 231, the war guilt clause was definitely a way to humiliate the country. The Germans were outraged at being blamed for a war they did not start. ...read more.

There colonies were also taken away and given to other members of the Treaty. All these punishments were hugely humiliating for Germany who prided their army and navy, not only this it was intentional to stop development. Germany could not grow more powerful without connections with colonies for trade and a strong navy and army. Clemenceau?s main aim for the treaty was to completely cripple German. The people of France were hugely angered over the devastating damage the war had caused and France along with Britain were looking for a scape goat. Clemenceau?s idea for huge reparations was passed and Germany was set a target of paying 10,000,000 which for the time was an inconceivable amount. Germany even before the war were in a terrible state economically due to the strain of the war which made it even more unlikely they could pay. The reparations were put in place to stop Germany from reforming and reduce the chance of them starting another war. Another way the treaty reduced reform was to remove the Saar and the Rhineland from their control. ...read more.

In conclusion the Treaty of Versailles was very much a punishment with aims to cripple and humiliate Germany. This was achieved by incredibly high reparations that Germany would struggle to repay, the removal of the air force and colonies and the reduction of the army, the removal of the key industry sector the Saarland and the Rhineland. These were harsh as to make sure Germany would not develop quickly and cause another war. There was nothing in the Treaty that was in favour of reforming Germany apart from the League of Nations that had intentions of uniting countries but this did not succeed as America became isolationist so were not a member and Germany became excluded. Britain?s priminister Lloyd George recognised that Germany?s economy had to be preserved but to stay in power he had to want to crush Germany and although America were hugely pushing for reform they were not listened to and became excluded from the Treaty of Versailles, this meant the main aims of the treaty was to cripple the country and not to reform. ...read more.