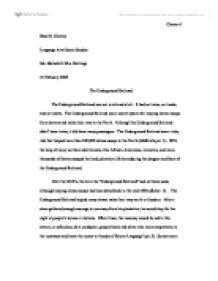 Slaves would resist in anyway possible. They would work slowly, act sick, destroy property, or even hurt themselves. When slaves made the decision to runaway, they were taking many risks. If they were caught they could be beaten, jailed, or sold. Once slaves were on the move, they could be questioned by anyone. Most slaves traveled at night, on foot carrying the little food they could grab. Most runaways lived off stolen fruit and unripe corn (Scher 8). Also, as soon as the slave's master realized his slave had escaped, he would immediately start searching for him. Slave hunters were hired just for that purpose. They would make their living off the rewards offered by slave owners. To confuse slave hunters and their specially-trained hunting dogs, slaves would wade in rivers to remove their sent and throw off their trail (Scher 8). The use of the Underground Railroad was spread by word of mouth, stories, and through songs. Slaves would escape from their plantations at night and run as fast as they could to the first station. ...read more.

Henry arrived twenty-six hours later. Some people built wagons with fake bottoms and transported slaves to freedom. Elijah Lovejoy had a secret room behind a fake wall at his home. Once the slaves were safely inside, the opening was covered by a desk. Others had tunnels, attics, or cellars that were used to temporarily house runaway slaves. People who were caught helping slaves escape could be put in prison as a result of the Fugitive Slave Act of 1850 (Scher 5-7). Some freed slaves joined the Union army to fight for the abolition of slavery. Many of these soldiers were captured by the Confederates and put in the Andersonville prison. The conditions were much worse than the lives the soldiers had endured as slaves. Thirteen thousand Union soldiers died in this prison - "a death camp-maybe the only real one to exist on American soil" (Rinaldi 165). The Underground Railroad successfully helped gain freedom for thousands of slaves. It is a great testimony to the will of human beings who are committed to a cause that stirs great passion. The risks were great to the people who supported the railroad, but they were willing to undergo the risks because they valued freedom and believed all humans should be free. ...read more.