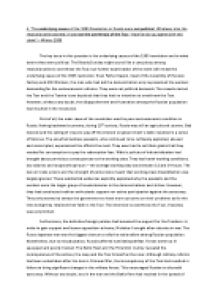 The underlying causes of the 1905 Revolution in Russia were not political. Whatever else the revolutionaries wanted, it was not the overthrow of the Tsar. How far do you agree with this claim?

﻿6. ?The underlying causes of the 1905 Revolution in Russia were not political. Whatever else the revolutionaries wanted, it was not the overthrow of the Tsar.? How far do you agree with this claim? ? Winter 2008 The key issue in this question is the underlying causes of the 1905 revolution and to what extent they were political. The Bloody Sunday might sound like a conspiracy among revolutionaries to overthrow the Tsar, but further examination of the event will reveal the underlying causes of the 1905 revolution. Even Father Gapon, head of the Assembly of Russian Factory and Mill Workers, the man who had led the demonstration only represented the workers demanding for the socioeconomic reforms. They were not political demands. The crowds carried the Tsar and the Tsarina icons depicted that they had no intention to overthrow the Tsar. However, without any doubt, the disappointment and frustration among the Russian population had resulted in the revolution. First of all, the main cause of the revolution was the poor socioeconomic condition in Russia. ...read more.

Furthermore, the defective foreign policies had lessened the support for the Tsardom. In order to gain support and lessen opposition at home, Nicholas II sought after victories in war. The Russo-Japanese war was the biggest chance to rally the nationalism among Russian population. Nonetheless, due to miscalculation, Russia suffered humiliating defeat. Forces were too ill equipped and poorly trained. The Baltic fleet and the Potemkin mutiny revealed the incompetence of the armies, the navy and the Tsar himself as the ruler. Although military reforms had been undertaken after the loss in Crimean War, the incompetency of the Tsar had resulted in failure to bring significant changes in the military forces. This encouraged Russian to discredit autocracy. Without any doubt, loss in the war and the Baltic fleet had resulted in the spread of dissatisfaction among middle class and armies. Although these facts proved the weaknesses of the Tsar as a ruler, he had never lost the support from the armies during the 1905 revolution. In fact, the revolutionaries were suppressed by the troops themselves and the revolution ended. Additionally, the revolution was the result of the defect of the Tsardom. ...read more.

On one hand, the group of Liberals including the populists and the Menshevik had no intention to overthrow the Tsar. They only wanted the establishment of constitutional monarchy. On the other hand, the radicals consisting of Nihilists, Marxist, Social Revolutionary Party and the Bolshevik wanted the revolution. They believe in the efficacy of political terror and spectacular political assassinations; their victims including two ministers and one prime minister. Political opposition to autocracy was not, however, the monopoly of the extreme left. Majority of the population ? the peasants and the workers ? did not even care about the political concerns. What is more, the demonstrators were led by a priest, who believed in the principle of orthodoxy, supporter of the autocracy; he would never have the intention or thought of overthrowing the Tsar. It was merely a demonstration demanding for reforms. Without any doubt, the October Manifesto did prove the existence of the political pressures on the Tsardom, yet the socioeconomic issues were the major reasons that drove people to revolt against the government. Therefore, I largely believe that the underlying causes of the 1905 revolution were not political. ...read more.