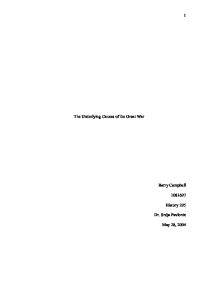 The Underlying Causes of the Great War.

The Underlying Causes of the Great War Barry Campbell 1081697 History 295 Dr. Srdja Pavlovic May 28, 2004 The First World War was to be the war to end all wars. The scale of the war was beyond anything previously witnessed in the history of mankind. The First World War's moniker of the Great War is well deserved, as it was the first total war, which involved everyday citizens in the inferno of modern warfare. Almost nine million people lost their lives as a result of the war and the boundaries of Europe were rearranged, resulting in resentments and conflicts, which last to this day1. Often the assassination of the heir to the Austrian throne, the Archduke Franz Ferdinand, is cited as what started the First World War. The assassination was like a spark that set Europe ablaze in a fury of military mobilization. Although this is true, the fuse had really been burning for a long time before the actual assassination occurred. Historians have often contended that the First World War was unavoidable. As F.H. Hinsley stated, " if the Sarajevo crisis had not precipitated a great war, some other crisis would have precipitated a war at no distant date"2. The purpose of this paper is to demonstrate that there were underlying factors that motivated each belligerent state to commit itself to the most devastating conflict to ever occur. ...read more.

Although Serbia had doubled its size, she remained landlocked and dissatisfied with her situation6. Serbia's sense of nationalism had been bolstered due to the Balkan Wars and it was nationalism, which caused the Serbians to regard the Serbians living in the Austrian-Hungarian Empire as their "oppressed brethren"7. Serbians sought to bring all Serbs together in one political unit. Nationalism led to an awakening of Serbian political aims8. On July 23, 1914, the Austrian government issued an ultimatum to Serbia that was so extreme that it made it impossible for the Serbians to accept. The aim of the Austrians was to extinguish Serbian nationalism. Serbian nationalism posed such a serious threat to the Empire's power over a population of mixed ethnicities, that Austria was willing to wage war. Another important factor, which contributed to causing the First World War, was militarism. The major powers of Europe had all built up their militaries to unprecedented sizes. With the exception of Britain, all of the major powers had huge standing armies and conscription with at least two years service required9. Military enthusiasm was throughout Europe and reflected in the dress of Europe's royal families. Military drilling and marching was voluntarily practiced by millions of European citizens. Glory was still associated with going to battle for one's nation. ...read more.

After the ascent of Wilhelm II to power, an aggressive foreign policy was administered unlike that of his predecessor's, the Bismarck. Any alliance with Russia was ignored in favor of this new aggressive, expansionist policy. Although Germany was not the only European state seeking an empire, their plans and actions became so ambitious after Wilhelm II's ascent that the security of other European states became seriously threatened. Russia accepted an alliance with France after the Kaiser refused to renew their alliance. This essentially turned Europe into two armed camps, where a simple spark such as the assassination of the Austrian heir, could cause war at any moment. Often, the system of alliances in Europe before the First World War have been cited as causing the war, but a closer examination reveals that the European powers were drawn into these alliances due to Germany's imperialistic desires. The Great War certainly was not fought for the sake of the Archduke Ferdinand. Volunteers from Europe and even here in Canada did not flood the enlistment offices to avenge the death of some obscure Austrian royal figure. Nationalism, militarism and imperialism were the underlying causes for so many to commit themselves to the horrors that followed. Even if the powers had known of the devastation and carnage that would come, there still would have been a war. Controlling Europe was viewed as worth the risks involved. ...read more.