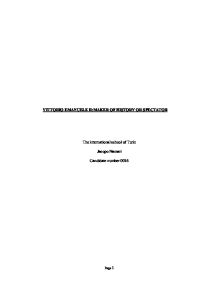 The unification of Italy was one of the most significant events of the period 1850-1870.

VITTORIO EMANUELE II:MAKER OF HISTORY OR SPECTATOR The international school of Turin Jacopo Namari Candidate number 0016 Table of Contents A. Plan of investigation: pag. 3 B. Summary of evidence: pagg. 3-7 C. Evaluation of sources: pagg. 7-8 D. Analysis: pagg. 8-10 E. Conclusion: pag. 10 VITTORIO EMANUELE II A) * Examine two sources learn about: * Vittorio Emanuele II's personality. * Vittorio Emanuele II's policy and relationship with his ministers. * The Unity of Italy: Vittorio Emanuele II: maker or spectator? B) The unification of Italy was one of the most significant events of the period 1850-1870. The crucial moments of the conquest of the Italian unification were articulated by the initiative of the Vittorio Emanuele II's house of Savoy, led until 1861 by the clear political action of Cavour and then by the right-wing historical governments, which succeeded in taking advantage of the favorable international situation. At first the French were interested in superseding the Austrian hegemony in Italy, which led to a second victorious war of independence. The Prussian defeated Austria and France. This allowed first the conquer of Veneto and Rome, then the domination of the generous democratic initiative of Mazzini and Garibaldi, who had to sacrifice their democratic principles in the name of national unity. Who was Vittorio Emanuele II? His origins are surrounded by mystery; he was born in Turin on 14 March 1820, the son of Carlo Alberto and Maria Theresa of Habsburg- Lorraine. ...read more.

Besides his desire to be the center of attention in international agreements, Vittorio Emanuele II also had an important role in the Italian home politics thanks also to the spontaneous aggregation of more moderate elements around his figure. As he grew older some aspects of his character worsened. For example his intolerance of etiquette led him to behave strangely. Hunting and associating with people foreign to high society and with women would always remain his favorite pastime. With ministers and Parliament he was one moment condescending, the next irritated. He always tended to overestimate his personal role in the conversations with diplomats and foreign journalists. In fact Vittorio Emanuele II had a smaller power than he thought or pretended he had. The king suddenly died in Rome on 9 January 1878. The historian and journalist Silvio Bertoldi wrote about him: "Vittorio Emanuele II was really popular as no other king of Italy would ever be."2 C) My two main sources for this research on Vittorio Emanuele II of Savoy are: "I Savoia" by Gianni Oliva and "I Savoia Re D'Italia" by Denis Mack Smith. Both books are classics: Gianni Oliva teaches contemporary history at the "Scuola d' Applicazione d' Arma" in Turin and is a well-known scholar of history of military institutions and of the Resistance Because of his kind of education he tends to have a more benevolent opinion of the king, often overlooking some of his faults in his relationship with the ministers. ...read more.

was much higher than that received by the British and the Prussian monarchies, and this although the Italian monarchy was six million lire in debt, in addition to the debts guaranteed by the king's personal properties. To elude the threat of a public verification of his expenses, Vittorio Emanuele II gave up a quarter of his income, but only if payment could be made without publicity by the government. E) To conclude and give a meaning to this research, I think that during his life and political career Vittorio Emanuele II showed a strong personality: he was an ambitious man, wishing to be the center of attention, a great intriguer who, despite his vanity and the inclination to take his ministers' merits, demonstrated to be a lively man and a brave king who well represented unified Italy and, together with Garibaldi, is still today a hero acclaimed by the nation. In the political field he always took part, whether actively or not, in the decisions of his governments, even if his relationship with Parliament and his ministers was often conflicting. Taking advantage of the significant powers bestowed on him by the Constitution, he tended to supersede his ministers' institutional role, but was then reluctant to take the responsibility of his personal initiatives. I do not think that Vittorio Emanuele II can be considered just a spectator of the Italian unification process: indeed, if the roles of figures such as Cavour, Mazzini and Garibaldi were fundamental, without the personal contribution of Vittorio Emanuele the Unification of Italy could not have been realized. ...read more.