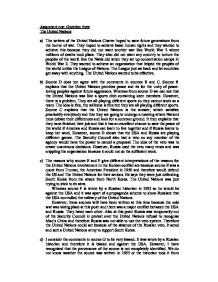 Asignment one: Question three The United Nations a) The writers of the United Nations Charter hoped to save future generations from the horror of war. They hoped to achieve basic human rights and they wanted to achieve this because they did not want another war like World War 2 where millions of deaths took place. They also did not want any country to torture the peoples of the world like the Nazis did when they set up concentration camps in World War 2. They wanted to achieve an organisation that helped the peoples of the world unlike the League of Nations. The League just sat back and let countries get away with anything. The United Nations wanted to be effective. b) Source D does not agree with the comments in sources B and C. Source B explains that the United Nations provides peace and its for the unity of peace-loving peoples against future aggressors. Whereas from source D we can see that the United Nations was like a sports club containing keen members. However, there is a problem. They are all playing different sports so they cannot work as a team. The idea is fine, the wiliness is fine but they are all playing different sports. Source C explains that the United Nations is the answer, which satisfies practically everybody and that they are going to undergo a meeting where Nations must debate their differences and look for a common ground. ...read more.

It was wrote by a Russian historian and therefore it is biased and against the USA. However, I have recognised that the provenance of the source is not completely identified. We do not know weather the source was written in 1955 or the historian took it from 1955. Therefore I had to make the assumption that the source was wrote in 1955. However, source H was wrote by an American cartoonist in 1952 and therefore this source would be biased and against Russia. Source G clashes with source H. Source G says the USA would not let China into the organisation. Whilst source H implies that the USA would have allowed China to come in but it was Russia who trying to get China in but were going about it the totally wrong way. They are providing China a door but Stalin is trying a different way of getting China in. It was just Russia's way of trying to effect the United Nations whilst at the same time China was getting hurt. This caused Russia to temporarily remove itself from the Security Council. However, this source could mean something else. My judgement of the source may be incorrect. However, Just because source G is biased it does not mean it is unreliable. ...read more.