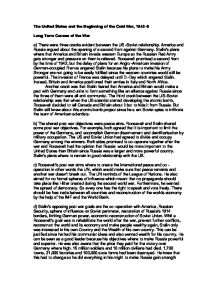 The United States and the Beginning of the Cold War, 1945-6

The United States and the Beginning of the Cold War, 1945-6 Long Term Causes of the War a) There were three cracks evident between the US-Soviet relationship. America and Russia argued about the opening of a second front against Germany. Stalin's plans where that America and Britain invade western Europe so the Russian Red Army gets stronger and pressure on them is relieved. Roosevelt promised a second front by the time of 1942, but the delay of plans for an Anglo-American invasion of German-occupied France angered Stalin because his plans to make his Army Stronger are not going to be easily fulfilled since the western countries would still be powerful. The invasion of France was delayed until D-Day which angered Stalin. Instead, Britain and America positioned their armies in Italy and North Africa. Another crack was that Stalin feared that America and Britain would make a pact with Germany and unite to form something like an alliance against Russia since the three of them were all anti communist. The third crack between the US-Soviet relationship was that when the US scientist started developing the atomic bomb, Roosevelt decided to tell Canada and Britain about it but to hide it from Russia. ...read more.

Churchill and Roosevelt rejected to the revision of Poland's eastern border and asked the London Poles to be included in the Committee and free Polish elections to be followed. Stalin didn't like it that the Anglo-Americans interfered in an affair of a country that was practically seen as "Russian security". The agreement was that Russia could regain her 1914 boundaries of Poland by absorbing eastern Poland, while Poland would receive parts of eastern Germany. g) Roosevelt was responsible for the Polish dispute since he contributed to the misinterpretation over Poland in two ways. He wanted the Soviets to continue their co-operation with America so he appeared to support the Soviet sphere of influence in 1933 and 1934. Then later he said that he didn't want the policy of sphere of influence and follow the pattern of democracy and American pattern of free elections and representative government. The Americans wanted to retrieve that what had been given away to previous meetings with Stalin, at the Yalta conference. This caused the Us policy to be incompatible. Secondly. Roosevelt kept the private deals with Stalin secret from the American nation, while in public they kept going on with their idea and vision of a post war world without the sphere of influence. ...read more.

Stalin pretended not to be concerned about this issue and wished the Americans good luck for the defeating of Japan, but secretly was worried about this since he knew that with this bomb America automatically gained more power and authority. As consequence of this, Stalin accelerated the atomic weapons building in the Soviet Union. With the atomic bomb, America was more powerful and immediately influenced American attitudes towards Soviet participation in the warfare against Japan. n) The Yalta conference divided Germany into four zones which where the British zone, the US zone, the French and the Soviet zone. Germany was concerned by the two features added at Potsdam. These were that first of all, it was agreed that each occupying power would be allowed to take compensation from its own zone. This was supposed to be compensation for financial losses, human and material during the war against Germany. The starting point of reparations the Russians would receive was agreed at Yalta and was a sum of 10 billion dollars. The second concern was that the occupying powers agreed to treat the four zones of occupation which where the British, Soviet, US and French occupation zones, as a single economic are. This means that all goods were supposed to be traded freely throughout all zones. ...read more.