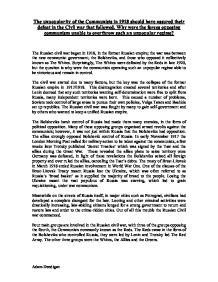 The unpopularity of the Communists in 1918 should have assured their defeat in the Civil war that followed. Why were the forces opposing communism unable to overthrow such an unpopular regime? The Russian civil war began in 1918, in the former Russian empire; the war was between the new communist government, the Bolsheviks, and those who opposed it collectively known as The Whites. Surprisingly, The Whites were defeated by the Reds in late 1920, but the question is why were the communists operating such an unpopular regime able to be victorious and remain in control. The civil war started due to many factors, but the key was the collapse of the former Russian empire in 1917/1918. This disintegration created several territories and after Lenin decreed that any such territories wanting self-determination were free to split from Russia, many independent territories were born. This caused a number of problems, Soviets took control of large areas to pursue their own policies, Volga Tatars and Bashkis set up republics. ...read more.

Four main groups are involved in the Russian civil war, with three of the groups opposing the fourth, the Communists commonly known as the Reds. The Reds came in the form of the Bolsheviks who controlled Russia, they were led by Lenin and Trotsky led The Red Army. The other three groups were the Whites, the Allies and the Greens. The Whites were the 'counter-revolutionists' they were the capitalists who hated socialism, who wanted a united Russia. The main leaders of the whites were Generals Denikin, Kolchak and Yudenich. The Allies were Britain, France and America, who wanted to prevent communism from spreading to Europe or the rest of the world, they were also angry that the Bolsheviks had cancelled the Tsar's debts. The Greens were small independent groups of peasants, bandits and nationalists who would roam Russia fighting anyone and raiding towns and villages for food and supplies these are the ones who caused Russia's cities to become crime-ridden. ...read more.

The Allies supported the Whites but rarely got involved, supplying war materials here and there every so often. The Bolsheviks were able to use the allied aid to the whites as propaganda, portraying the western capitalists as operating through the whites. Foreign intervention had backfired. Propaganda was a powerful tool in winning the support of the people; The Communists used propaganda to show the war was one against evil, evil taking the form of Tsarism, the bourgeoisie and foreign capital. The Red terror was another key to Red victory, strict controlling and monitoring upon certain areas kept active opposition low; suspects were arrested by the cheka. People were afraid to speak out against the communist regime, potential opposition was kept to a minimum. In conclusion the forces opposed to communism were unable to overthrow it due to a lack of organisation. Unlike the Reds with strong leaders, they were weak and segmented with different aims for fighting the war ?? ?? ?? ?? Adam Deedigan ...read more.