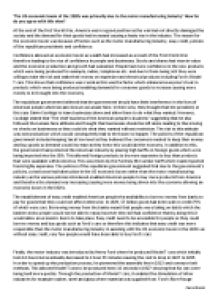 The US economic boom of the 1920s was primarily due to the motor manufacturing industry How far do you agree with this view?

﻿?The US economic boom of the 1920s was primarily due to the motor manufacturing industry? How far do you agree with this view? At the end of the First World War, America was in a good position as the war had not directly damaged the society and the demand for their goods had increased causing a hasty rise in the industry. The reason for the economic boom was because of factors such as the motor manufacturing industry, easy credit, policies of the republican presidents and confidence. Confidence allowed an economic boom as wealth had increased as a result of the First World War therefore leading to the rise of confidence in people and businesses. Stocks and shares had risen in value and the economic production and growth had sustained. People had more confidence in the new products which were being produced for example, radios, telephones etc. and due to them being rich they were willing to take the risk and stake their money on expensive and electrical products including Ford?s Model T cars. ...read more.

In addition to this, the government had protected the American industry by placing high tariffs on foreign goods which were being imported into the USA. This allowed foreign products to be more expensive to buy than products that were available within America. This was driven by the Fordney-McCumber tariff which made imported foods highly expensive. The policies of the republican government suggested that due to the government?s policies, a vast boost had taken place in the US economic boom rather than the motor manufacturing industry as the various policies introduced enabled American people to buy more products from America and therefore the demand was increasing causing more money being driven into the economy allowing an economic boom in the 1920s. The establishment of easy credit enabled American people the availability to borrow money from banks to pay for goods that they could not afford otherwise. In 1929, $7 billion goods had been sold on credit 75% of which were cars. Borrowing money from the banks meant that people were taking on debts which the bankers knew people would not be able to repay however they still had confidence that by doing this it would allow an economic boom to take place. ...read more.

Ford?s River Rouge Plant in Detroit employed around 60,000 workers who had individual tasks in the production of the car. Ford paid his workers well which meant that more people had wages which they could spend on buying expensive goods helping to escalate the money into the economy. Consequently, the motor manufacturing industry proves that through Ford?s business, he was able to support in the economic boom as he employed many people as well as stimulated other industries through the production of his cars. In conclusion, I believe that the motor manufacturing industry partly had some responsibility in causing the US economic boom as it stimulated other industries allowing economic development and therefore more money into the economy. However, I believe that the most important factor in allowing the boom was confidence as without people having confidence in themselves, their businesses and the consumers, there would not have been policies brought in, easy credit where bankers would be able to trust the consumers and allow them to borrow money in order to buy expensive goods such as cars. Zaira Khalid ...read more.