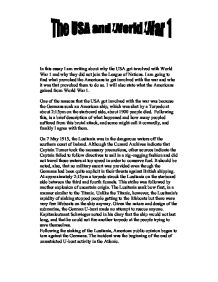 The USA and World War 1.

In this essay I am writing about why the USA got involved with World War 1 and why they did not join the League of Nations. I am going to find what provoked the Americans to get involved with the war and who it was that provoked them to do so. I will also state what the Americans gained from World War 1. One of the reasons that the USA got involved with the war was because the Germans sunk an American ship, which was shot by a Torpedo at about 2:15pm on the starboard side, about 1900 people died. Following this, is a brief description of what happened and how many peopled suffered from this brutal attack, and some might call it cowardly, and frankly I agree with them. On 7 May 1915, the Lusitania was in the dangerous waters off the southern coast of Ireland. Although the Cunard Archives indicate that Captain Turner took the necessary precautions, other sources indicate the Captain failed to follow directives to sail in a zig-zagging fashion and did not travel these waters at top speed in order to conserve fuel. ...read more.

The Germans sent a 'Zimmerman' note to the Mexicans to say that they would help them if the Germans won the war, But luckily the Americans latched on to this quickly and went to help Britain against Germany. The two other reasons that made America get involved with the war are both what we call a 'long term cause.' The first of those reasons is Wilson made 'peace proposals' which he promised to America that he would bring peace to the world, and helping Britain win the war would stop all the fighting and there would be peace in the world. The second 'long term cause' is if Britain didn't win the war America would lose a lot of money. Because America loaned Britain $4 billion and if Britain lost the war America would not get their money back. But if Britain won the war then America would get all their money back with interest. Plus helping Britain win the war would attract a lot more people to move there because they would feel as they are safe and cant be hurt, and that would make the US economy better. ...read more.

But on the other hand I do think they should have joined the League of Nations, I don't think Wilson should have been so stubborn about it all. But Wilson is his own man and who am I to argue with him, he won the war for Britain in my point of view, and I have just got a gut feeling he was one step ahead of everyone else. I think Germany was a very devious country but never the less they had the guts and determination to battle Britain and the USA. But after the war they didn't just fall on the floor and give up they got back up on there feet and got on with there lives and 20 years on they start World War 2!! As for Britain, you can't really fault them, they won the war, and Britain made new Allies that would help them in the near future. So Britain gained a lot from the war as did America, but as for Germany, who is going to bring the pride back to their country so they can hold their heads high and be proud to be a German, maybe the name Adolf Hitler springs to mind..... ...read more.