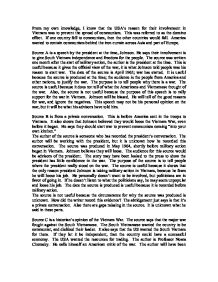 The USA's reasons for their involvement in Vietnam - source related study.

From my own knowledge, I know that the USA's reason for their involvement in Vietnam was to prevent the spread of communism. This was referred to as the domino effect. If one country fell to communism, then the other countries would fall. America wanted to contain communism behind the iron curtain across Asia and part of Europe. Source A is a speech by the president at the time, Johnson. He says their involvement is to give South Vietnam independence and freedom for the people. The source was written one month after the start of military action, the author is the president at the time. This is useful because it gives the official view of the war, it is what Johnson told people was his reason to start war. The date of the source is April 1965; war has started. It is useful because the source is produced at the time; the audience is the people from America and other nations, to justify the war. ...read more.

The author will be working with the president, but it is unknown how he recorded this conversation. The source was produced in May 1964, shortly before military action began in Vietnam. Johnson believes they will loose. The audience for this source would be advisors of the president. The story may have been leaked to the press to show the president has little confidence in the war. The purpose of the source is to tell people where the president really stood on the war. The source is useful because it shows that the only reason president Johnson is taking military action in Vietnam, because he fears he will loose his job. He personally doesn't want to be involved, but politicians are in favor of going in. If he doesn't listen to what the politicians say, he may seem unpopular and loose his job. ...read more.

This gives the American critic plenty of time to research why he felt the war failed. The author is a well-known critic, and will research his opinion. The audience would be people interested in the war. The source is useful because it gives a well-researched opinion. His opinion is trusted and he is knowledgeable in the matter. The source is also useful because it is balanced and the source has a clear objective. The most useful source is source C. The source has plenty of facts for the start of the war. Noam has produced a balanced opinion with a clear objective. The other sources are useful. Source A gives us the official view on the war. Source B is useful because it gives Johnson's real opinion on the war. Though source C is the most useful for giving an informative view on the war. Despite the fact Noam Chomsky was a self confessed critic of the war. He would have only come to the conclusion after extensive research. ...read more.