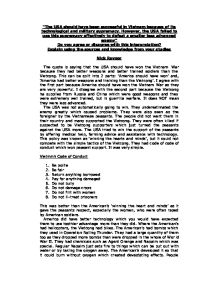 The USA should have been successful in Vietnam because of its technological and military supremacy. However, the USA failed to use this supremacy effectively to defeat a smaller less advanced enemy&quot;

"The USA should have been successful in Vietnam because of its technological and military supremacy. However, the USA failed to use this supremacy effectively to defeat a smaller less advanced enemy" Do you agree or disagree with this interpretation? Explain using the sources and knowledge from your studies Nick Raynor The quote is saying that the USA should have won the Vietnam War because they had better weapons and better trained soldiers than the Vietcong. This can be split into 2 parts: 'America should have won' and, 'America had better weapons and training than the Vietcong'. I agree with the first part because America should have won the Vietnam War as they are very powerful. I disagree with the second part because the Vietcong ha supplies from Russia and China which were good weapons and they were extremely well trained, but in guerrilla warfare. It does NOT mean they were less advanced. The USA was not automatically going to win. They underestimated the enemy greatly which caused problems. They were also seen as the foreigner by the Vietnamese peasants. The people did not want them in their country and many supported the Vietcong. They were often killed if suspected to be Vietcong supporters which just turned the peasants against the USA more. The USA tried to win the support of the peasants by offering medical help, farming advice and assistance with technology. ...read more.

'Life' magazine found in 1967 that it cost $400,000 to kill one Vietcong soldier. As it was a totally uncensored war, facts and figures like this got back to the American public so support just disappeared. Perhaps if it had been a censored war and the American public had not lost support for the war, America may have won it. There is also some secondary evidence which backs up my argument. A G.C.S.E revision guide for the year 2000 gave 6 main reasons for America failing in the Vietnam War, one of them being 'American public opinion turned against the war'. Sir Robert Thompson from War in Peace said in 1981, 'The US media bore a heavy responsibility (for the failure in Vietnam).........Millions of people in the US did oppose the war for reasons which were sincerely felt', and their activities were an important element in the failure of American involvement'. He is meaning to say the US media played a vital part in America's failure as it turned public opinion against the war. I could go on naming more sources but I would be repeating myself. I have much evidence that backs up my argument that just because America had better equipment etc..., it didn't mean they were automatically going to win the war as they did not have public support. I have actually found a source which maybe disagrees with my source but part agrees aswell. ...read more.

They also had support fro Russia and China who provided them with weapons. Strictly speaking, these weapons were not as good as the American's, but it was not like the Vietcong were fighting with spears. They had decent military weapons which proved they were not less advanced. On the white sheet I was provided with, Source 12 shows North Vietnamese soldiers equipped for war. They have decent guns and helmets. They are equipped well enough for war and are not lesser equipped than the USA. Source 10 also shows the extensive and impressive tunnels the Vietcong had underground. This shows real brains and skill which you would not expect from a lesser advanced army. These tunnels caught the American's out many times. I do have evidence that disagrees with my argument. It is from a book on Vietnam by an American Author in 1983. It lists all the equipment that the American soldiers had. 'Helicopter...tank and armoured cars...mortars, machine guns, grenade and rocket launchers...M16...air to surface missiles...bombs of every shape and size...napalm bombs...cluster bombs...chemical weapons.' Now the Vietcong may have mad decent weapons, but they had nothing of the American's standards which therefore makes them a less advanced army. To conclude, I feel the American's should have really won the war but there were factors brought into play they did not expect. They did not expect to lose the support of their own people and not have the support of the Vietnamese peasants which were major contributions to them not winning the war. The Vietcong had slightly less advanced weaponry but not by much and the soldiers were impeccably trained. ...read more.