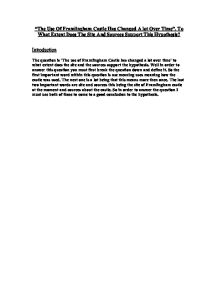 &quot;The Use Of Framlingham Castle Has Changed A lot Over Time&quot;. To What Extent Does The Site And Sources Support This Hypothesis?

National Events And How They Affected Framlingham Castle Medieval Times During this time castles were granted to barons for being loyal and supporting the crown militarily. In this time three important families owned Framlingham in turn these being the Bigods, Mowbrays and Howards. The Bigods and Mowbrays both had histories of rebelling against the monarch as used the castle as a base to do this. So if they failed the castle and estates would be taken from the proprietor. Sixteenth Century This was the period when the reformation of the churches occurred. This is when the protestant church broke away from the Roman Catholic church and Henry VIII made himself head of the church of England. As a result there was conflicts between catholic and Protestants. The way these two groups were treated depended on the monarch. Where Edward and Elizabeth were protestants so favoured them while Mary was catholic so favoured them. While Elizabeth was in power she used Framlingham as a prison for recusant priest as a result of the reformation of the church. Also with the reformation the monasteries in England were closed down. Now you may think that this wouldn't be a problem but the monasteries did a lot of work helping the old, sick and poor. The church could no longer help the amount of people they once did. Food prices increased and growing population meant that unemployment increased. Thus it was up to the monarchy to help these people. In 1601 under Elizabeth's reign a law was passed called "The Elizabethan Poor Law" this meant that: Each Parish had to look after their own poor A poor rate was to be collected from every household by Overseers of the church (often church wardens) ...read more.

This was the wish of Robert Hitcham who had bought the property from the Howard's in 1635 but died the next year and left the property to Pembroke College. Once the poorhouse was finished mostly children went there to get work but they also got an education. As stated in source H 'Children were clothed in blew bonnets as at Christ Church Hospital and to have Sir Robert Hitcham's arms upon their coats... The master of the poorhouse was every day to give leave to each child two hours to read, write or cast accounts as the School Master think fittest' The poorhouse was built using stone from the Great Hall and or the Chapel. The poorhouse was built on the site of the Great Hall. The poorhouse functions until 1839. 19th Century After 1839 Framlingham was used sparadically as a drill hall and firestation but was not lived in. In 1913 Pembroke College handed over the site to the State. In 1984 it was taken over by English Heritage where it is now used as a tourist center and also a place where concerts are held because of its excellent acoustic qualities. This is shown in source J 'Jazz at Fram'. In source J it gives details of events happening at Framlingham castle. In order for English Heritage to make it into a tourist center they restored some of the stonework and also made the wall walk safe, so basically just made everything safer for the public. So in conclusion you can see that by using the Site and the sources that Framlingham Castle's use has changed a lot from the time it was built to present day. So in effect I agree with the hypothesis in the question. ...read more.