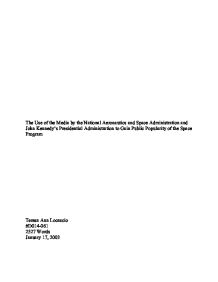 The Use of the Media by the National Aeronautics and Space Administration and John Kennedy's Presidential Administration to Gain Public Popularity of the Space Program Teresa Ann Locascio #D014-061 2527 Words January 17, 2003 The National Aeronautics and Space Administration, also known as NASA, along with President Kennedy's Administration used all forms of the media during the early 1960s as a mouthpiece to the public in order to more easily manipulate the American people into eagerly agreeing with the space program without informing them of its main purpose of 'beating' the Soviet Union in the Cold War. John Fitzgerald Kennedy showed a face to the public that was otherwise unknown; he showed a positive attitude about the space program to the public, ensuring them that its sole intentions were to further American scientific research, while admitting to his Cabinet and House of Representatives that the space race's main interests were in both beating the Soviets to space, and ensuring his re-election in 1964. NASA proffered high-priced contracts approved by the president to many prestigious magazines, even putting such contracts up for auction for many different magazines to bid on, which allowed the magazine that bought to contract to publish human interest and other such stories about American astronauts in order to get the American public's attention and admiration for the newest proclaimed heroes of their country. ...read more.

In the early 60s, the officials of the National Aeronautics and Space Administration realized that if the American people were to be unconditionally supportive of the space program, they were going to need a way to find out about the space program's newest advancements and goings-on. After researching for months, NASA procured the knowledge that many Americans subscribed to magazines such as Time, Life, and Newsweek. In light of this helpful information, NASA began to draw up contracts that would trade the authorization and complete cooperation from NASA for the magazine to publish stories about the space program for large sums of money paid to NASA by the magazine. It was a wonderful plan because, through the magazines, the American people would learn more about the inside of NASA, a place no common United States citizen would ever hope to see, and NASA would receive more funding for their highly expensive space program. Newsweek, one of the prominent American magazines, bought one such contract with NASA. In a short article published on John Glenn, the first American man to walk in space, Newsweek called him "a single remote figure" and compared him to Charles Lindbergh, another "authentic individualist."7 In another such instance, Life magazine bought a contract with NASA for five hundred thousand dollars and acted as NASA's main stream in the popular media. ...read more.

and House of Representatives that the space race's main interests were in both beating the Soviets to space, and ensuring his re-election in 1964. NASA put out high-priced contracts to many magazines popular in the average American's mind's eye, even putting such contracts up for auction for many different magazines to bid on, which allowed the magazine that bought to contract to publish human interest and other such stories about American astronauts in order to get the American public's attention and admiration for the newest proclaimed heroes of their country. The televised news along with the printed newspapers aggrandized the American astronauts, making them larger than life, in an obvious effort to stimulate the average American into thinking that the space program was peacefully gaining new, unknown frontiers. When criticism of the space program increased in 1963, speaking appearances were increased by the NASA administration in hopes that speeches soothingly convincing the public of undaunted operations would increase the popularity and confidence in their program. While no one at the time caught on, the National Aeronautics and Space Administration worked successfully with Kennedy's Presidential Administration to keep the American populous unaware of the ulterior motives that lay behind their operations, yet still in favor of the new, exciting trek into the galaxy. ...read more.