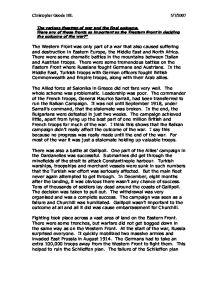 The various theatres of war and the final outcome.

The various theatres of war and the final outcome. Were any of these fronts as important as the Western Front in deciding the outcome of the war?" The Western Front was only part of a war that also caused suffering and destruction in Eastern Europe, the Middle East and North Africa. There were some dramatic battles in the mountains between Italian and Austrian troops. There were some tremendous battles on the Eastern Front where Russians fought Germans and Austrians. In the Middle East, Turkish troops with German officers fought British Commonwealth and Empire troops, along with their Arab allies. The Allied force at Salonika in Greece did not fare very well. The whole scheme was problematic. Leadership was poor. The commander of the French troops, General Maurice Sarrail, had been transferred to run the Balkan Campaign. It was not until September 1918, under Sarrail's command, that the stalemate was broken. In the end, the Bulgarians were defeated in just two weeks. ...read more.

The campaign was seen as a failure and Churchill was humiliated. Gallipoli wasn't important to the outcome at all and all it did was cause embarrassment for Churchill. Fighting took place across a vast area of land on the Eastern Front. There were some trenches, but warfare did not get bogged down in the same way as on the Western Front. At the start of the war, Russia surprised everyone. It quickly mobilized two massive armies and invaded East Prussia in August 1914. The Germans had to take an extra 100,000 troops away from the Western Front to fight them. This helped to ruin the Schlieffen plan. The failure of the Schlieffen plan was important to the outcome of the war. Because if the Schlieffen plan had succeeded the Germans might have won the war. The Russian armies enjoyed some early successes but at the Battle of Tannenberg they suffered a shattering defeat by German forces. ...read more.

The Germans realized that if they were to win the war they would have to concentrate their efforts on the Western Front against the more economically strong France and Britain. Although the Eastern Front occupied over a million German troops, the bulk of the troops and material was sent to the Western Front to try and achieve victory there. The Germans did hold the advantage on the Western Front. After all they were occupiers of much of Belgium and Northern France. They had also generally managed to secure the higher ground being in a position to decide where to withdraw if necessary. Ultimate victory over Germany would have to come in the fighting on the Western Front. Although several attempts were made to open up other fronts against Germany's allies between 1915 and 1917 (e.g. using the Italian forces to attack the Austrians; attempting to land troops in Turkey in 1915 to open a route to assist the Russians; attacking Bulgaria through Greece all these proved to be mere ' side shows' compared to the fighting on the western front. Christopher Goode 10L 5/7/2007 ...read more.