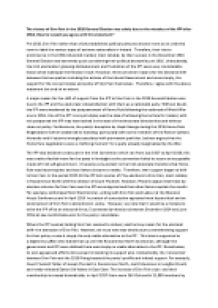 The victory of Sinn Fein in the 1918 general election was solely due to the mistakes of the IPP after 1914. discuss

﻿The victory of Sinn Fein in the 1918 General Election was solely due to the mistakes of the IPP after 1914. How far would you agree with this statement? Pre 1916, Sinn Fein rather than a fully established political party was known more as an umbrella term to label the various types of extreme nationalists in Ireland. Therefore, their rise to prominence in the 1916-18 period marked, most notably, by their success in the December 1918 General Election was extremely quick considering their political anonymity pre 1916. Undoubtedly, the Irish electorates? growing disillusionment and frustration of the IPP was a very considerable factor when looking at the Election result. However, there are other reasons for the electoral shift between the two parties including the actions of the Liberal Government and more simply, the support for the core principles and policy of Sinn Fein themselves. Therefore, I agree with the above statement but only to an extent. A major reason for the shift of support from the IPP to Sinn Fein in the 1918 General Election was due to the IPP and the electorate?s dissatisfaction with them as a nationalist party. Without doubt, the IPP were weakened by the postponement of Home Rule following the outbreak of World War one in 1914. ...read more.

This idea is supported to a degree by Laffan who stated that up until the Roscommon North by election, although the government and IPP were disliked there was simply no viable alternative to the IPP. Nonetheless, its own appeal and efforts did succeed in boosting its support also. Undoubtedly, the ?connection? between Sinn Fein and the 1916 Rising boosted the party?s profile and indeed support. For example, Count Plunkett father of Joseph Plunkett in Roscommon North, Joe McGuinness in Longford South and newly-released Eamon De Valera in East Clare. The increase of Sinn Fein clubs and their membership increased dramatically: in April 1917 there were 166 Clubs with 11,000 members by October 1917 there were 1,200 clubs with approximately 250,000 members. These clubs gave Sinn Fein, amongst other things, a good organisational base in terms of support. Unlike their IPP counterparts, the potential for internal dissension was overcome when the party was united under the leadership of De Valera. Generally speaking, a party with a seemingly unified approach will perform better electorally. The issue of Home Rule very much weakened the IPP, however, Sinn Fein on the other hand were very much strengthened in their very strong and unified in their commitment to winning an Irish Republic through a policy of abstention from Westminster. ...read more.

Firstly, the mistakes of the IPP, in particular their lack of action over Home Rule, was a considerable factor in that the Irish people would shift their support electorally to a party who seemed committed to Home Rule/Republican ideas, unlike the wavering IPP. Secondly, the appeal of Sinn Fein was another factor; the party through the support of the Roman Catholic hierarchy and their rather triumphant by-election victories throughout 1916 and 1917 identified the party as both respectable and popular with the electorate. Furthermore, many people felt that the IPP had sold out on their promises of Home Rule and desired more radical action, which Sinn Fein claimed they would deliver- an Irish republic. Thirdly, the actions of the Liberal Government, through wrongly linking Sinn Fein and the Rising and their executions of the ringleaders and imprisonment of3,000 others. Moreover, their duplicity surrounding the Lloyd-George negotiations perhaps cost them a lot of respect and legitimacy with the Irish electorate and perhaps this disillusionment with the British Government was another factor why Sinn Fein?s abstentionist policy received such widespread support. Therefore, I conclude that the statement that Sinn Fein?s electoral victory in 1918 was solely down to the actions of the IPP is not absolute as it is clear that there are other reasons for this. ...read more.

The writer shows a really sound knowledge of the subject and supports the with an excellent range of information. However, the expression of a few sections could be improved and a couple of small sections lack the accuracy of the main essay. More crucially, the actions of the British government- the shootings after 1916, conscription, and the maintenance of martial law well after the Rising which made life difficult for ordinary Irish people- need more prominence. But this is still an effective and well-informed answer which could be made even stronger by being brave enough to argue with the question's argument a little more!