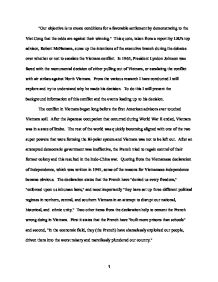 The Vietnam conflict - &quot;Our objective is to create conditions for a favorable settlement by demonstrating to the Viet Cong that the odds are against their winning.&quot;

"Our objective is to create conditions for a favorable settlement by demonstrating to the Viet Cong that the odds are against their winning." This quote, taken from a report by LBJ's top advisor, Robert McNamara, sums up the intentions of the executive branch during the debates over whether or not to escalate the Vietnam conflict. In 1965, President Lyndon Johnson was faced with the monumental decision of either pulling out of Vietnam, or escalating the conflict with air strikes against North Vietnam. From the various research I have conducted I will explore and try to understand why he made his decision. To do this I will present the background information of this conflict and the events leading up to his decision. The conflict in Vietnam began long before the first American advisors ever touched Vietnam soil. After the Japanese occupation that occurred during World War II ended, Vietnam was in a state of limbo. The rest of the world was quickly becoming aligned with one of the two super powers that were forming the Bi-polar system and Vietnam was not to be left out. After an attempted democratic government was ineffective, the French tried to regain control of their former colony and this resulted in the Indo-China war. Quoting from the Vietnamese declaration of Independence, which was written in 1945, some of the reasons for Vietnamese independence became obvious. The declaration states that the French have "denied us every freedom," "enforced upon us inhuman laws," and most importantly "they have set up three different political regimes in northern, central, and southern Vietnam in an attempt to disrupt our national, historical, and ethnic unity." ...read more.

The youngest minority leader in senate history, in 1954, when the Democrats won control, he became the youngest majority leader in history. Selected as John F. Kennedy's running mate in the 1960 election, he rode Kennedy's victory into the white house as vice-president. After the assassination of Kennedy in 1963, LBJ was sworn in as president. When it was Johnson's turn to run alone in 1964, he won 64 percent of the vote and enjoyed the largest margin of victory in American history. The great opponent of poverty, LBJ's "Great Society" programs were meant to deal with the American under classes. A man who pushed civil rights and space exploration legislation through congress, LBJ's success as Commander-in-Chief was not as great. Bogged down by the situation that he inherited in Vietnam, LBJ at first was unable to focus much attention on anything other than southeast Asia. Johnson's accomplishments as president consisted of the Medicaid act, the voting rights act, and unfortunately, the escalation of the war in Vietnam. President Johnson's decision to escalate the war was not totally his. In the closing months of 1963, North Vietnam forced his hand by stepping up its war efforts against the south. After hearing from Ambassador Lodge that the north was now sending its own units into the south, Johnson on the 26th of November, issued National Security Action Memorandum 273, which affirmed the U.S. "central objective" of stopping the "externally directed and supported communist conspiracy." Conditions continued to deteriorate and the military group that overthrew Diem was itself overthrown by General Nguyen Khanh. In early 1964 LBJ was again faced with the decision of whether or not to escalate and again, like Eisenhower and Kennedy before him, he declined. ...read more.

The "Domino Theory" that so many politicians used as a reason for escalation was in fact accurate and took place with amazing speed. Directly after the U.S. withdrawal and the fall of South Vietnam, North Vietnam was successful in toppling Laos and Cambodia. On the American home front the war had led to some of Americas darkest days. The conflict was responsible for great upheaval in American life but that was not all. The outcome of the war on the U.S. military is astonishing as well. The total price tag for the conflict is estimated at 167 billion dollars. 2.7 million American men and women sacrificed parts of their lives to fight kin southern Asia of which 58,000 died. The American military lost 8,588 total aircraft and the total number of wounded soldiers was over 300,000. On the 27th of January, 1973 the U.S. signed the Paris Peace agreements and brought to a close their involvement in Vietnam. Ironically article 1 of the agreement states that "the U.S. and all other countries respect the independence, sovereignty, unity, and territorial integrity of Vietnam as recognized by the 1954 Geneva Accords." The same document that the French used to withdraw from Vietnam was now, 19 years later, being obeyed. Chapter V of the Paris agreement is the terms for the "reunification of Vietnam" a reunification that would not have been necessary had the country not been split along the 17th parallel. The U.S. was responsible for much of what happened in Vietnam. U.S. policies of involvement in anti-Communist crusades did not always benefit the intended country and, in the case of Vietnam, this was also true. The country of Vietnam would have been better off without the U.S. involvement that resulted in tremendous loss. ...read more.