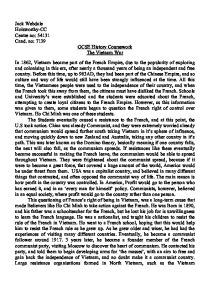 Jack Webdale Holsworthy-CC Centre no: 54131 Cand. no: 7139 GCSE History Coursework The Vietnam War In 1862, Vietnam became part of the French Empire, due to the popularity of exploring and colonising in this era, after nearly a thousand years of being an independent and free country. Before this time, up to 983AD, they had been part of the Chinese Empire, and so culture and way of life would still have been strongly influenced at the time. All this time, the Vietnamese people were used to the independence of their country, and when the French took this away from them, the citizens must have disliked the French. Schools and University's were established and the students were educated about the French, attempting to create loyal citizens to the French Empire. However, as this information was given to them, some students began to question the French right of control over Vietnam. Ho Chi Minh was one of these students. The Students eventually caused a resistance to the French, and at this point, the U.S took notice. China was already Communist, and they were extremely worried already that communism would spread further south taking Vietnam in it's sphere of influence, and moving quickly down to new Zealand and Australia, taking any other country in it's path. This was later known as the Domino theory, basically meaning if one country falls, the next will also fall, as the communism spreads. ...read more.

As the main aim of the U.S was to prevent the spread of communism, it was always important to keep involved and make sure that a general election and other causes do not ruin their efforts. The U.S decided it was best not to send a large force to Vietnam, as the American public was becoming unhappy with this tactic after the war in South Korea. So instead they sent a small group of Military advisors In June 1954. This consisted of a twelve-man team who were attempting to change the way the communists were spreading. It was becoming more aware that the U.S was increasingly involved in Vietnam. These twelve men launched a propaganda campaign, similar to the one in WW2 between Germany and Britain. Their aim was to mislead the public into believing the communist leaders were an unwise choice in the election, to ensure that the country would no reunite as a communist country. They also collected figures, showing that Vietnam was going through an economical miracle under his rule. Finally, they began to train the South Vietnamese army (ARVN), and it was coming clear that there would eventually be open warfare between the two sides. Kennedy's intention of putting Diem in control of South Vietnam was to have him as a puppet leader, having him take action under strong influence of the U.S. ...read more.

The war for America had ended, and they withdrew their troops and had their prisoners of war returned. However, even with America gone, the war continued between the NLF and the South Vietnam army, and the U.S continued to give aid to the ARVN, as they still wanted to stop communists taking over. Around 1975, America was convinced that the war was over for them. South Vietnam fell to communism after much fighting, but the spread did not continue as the Domino Theory explained. Evaluating the U.S involvement with the Vietnam War, I think it was mostly unjustified and the decisions made by the U.S were too rushed, and not properly thought out. Too many mistakes were made in my opinion. They got involved mainly to stop communism, and did this by filling the gap France had left when she withdrew; They kept involved by giving aid to South Vietnam, and they tried to support Diem the best they could through his mistakes and the Buddhist protests and while he was undermined by Ho Chi Minh. The U.S was far too worried about the spread of communism, and did not think about other possibilities that could have happened in the communist spread. I also believe they took too many drastic measures to prevent communism spreading, like killing the Vietnam citizens and flattening forests, while losing thousands of their own soldiers in the process. Overall, I think it was a historical disaster for the America. ...read more.