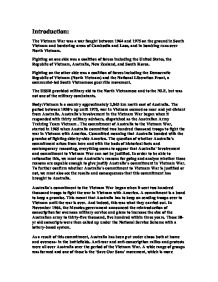 Introduction: The Vietnam War was a war fought between 1964 and 1975 on the ground in South Vietnam and bordering areas of Cambodia and Laos, and in bombing runs over North Vietnam. Fighting on one side was a coalition of forces including the United States, the Republic of Vietnam, Australia, New Zealand, and South Korea. Fighting on the other side was a coalition of forces including the Democratic Republic of Vietnam (North Vietnam) and the National Liberation Front, a communist-led South Vietnamese guerrilla movement. The USSR provided military aid to the North Vietnamese and to the NLF, but was not one of the military combatants. Body:Vietnam is a country approximately 2,845 km north east of Australia. The period between 1950's up until 1975, war in Vietnam seemed so near and yet distant from Australia. Australia's involvement in the Vietnam War began when it responded with thirty military advisers, dispatched as the Australian Army Training Team Vietnam . The commitment of Australia to the Vietnam War, started in 1965 when Australia committed two hundred thousand troops to fight the war in Vietnam with America. ...read more.

Across the country, there were republic rallies and protests; public figures spoke out against the war and universities became centres for opposition to the war. The protest grew to the extent of mass protest- the moratorium movement where hundreds of thousands of people stopped work in a mass protest demanding the unconditional and total withdrawal of Australian troops from Vietnam and the urgent elimination of conscription. While all this intense chaos was happening in Australia, Australian troops were being put to the hardest test with the conditions in Vietnam as a result of the commitment. It was the first time that Australia sent conscripts overseas and not even in direct defence of Australia. Australian troops were engaged in the heaviest actions of war such as that of the Long Tan war. Guerrilla warfare and surprise attacks from the Viet Cong only worsen the scenario. From the time of the arrival of the first members of the Team in 1962, until late 1970, when Australia had begun to wind down tis military efforts in Vietnam, five hundred and twenty Australians were killed, and two thousand, four hundred were wounded. ...read more.

Fist of all, how can Australia help stop the war and the rising casualties, by getting into war? We cannot help stop war by getting involved militarily. If Australia wanted to help the war through humanitarian causes, it should have been involved of the aids for those people who were really affected by the war. These reasons that Australia believed in before were all wrong. Which, strongly supports that the commitment of Australia in Vietnam War cannot be justify because Australia did not even understand the issues involving Vietnam War at that time. Conclusion: With the consequences of the commitment and the reasons of Australia's commitment through 1965 to 1975, Australia's commitment in the Vietnam War could not be justified. It was a rush decision, which Australia got into without even propely knowing the status and political issues within the war. If Australia did understand the issues and concerns, it should not have worried about the domino theory in the first place and would not have had the attitude towards America 'doing each other a favour'. Australia's involvement in Vietnam War only cost innocent lives and chaos, which did not bring anything good. ...read more.